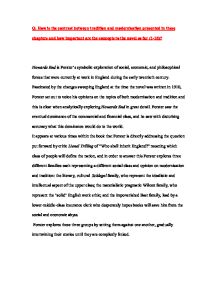 How is the contrast between tradition and modernisation presented in these chapters and how important are the concepts to the novel so far (1-18)?

Q. How is the contrast between tradition and modernisation presented in these chapters and how important are the concepts to the novel so far (1-18)? Howards End is Forster's symbolic exploration of social, economic, and philosophical forces that were currently at work in England during the early twentieth century. Fascinated by the changes sweeping England at the time the novel was written in 1910, Forster set out to voice his opinions on the topics of both modernisation and tradition and this is clear when analytically exploring Howards End in great detail. Forster saw the eventual dominance of the commercial and financial class, and he saw with disturbing accuracy what this dominance would do to the world. It appears at various times within the book that Forster is directly addressing the question put forward by critic Lionel Trilling of "Who shall inherit England?" meaning which class of people will define the nation, and in order to answer this Forster explores three different families each representing a different social class and opinion on modernisation and tradition: the literary, cultural Schlegel family, who represent the idealistic and intellectual aspect of the upper class; the materialistic pragmatic Wilcox family, who represent the "solid" English work ethic; and the impoverished Bast family, lead by a lower-middle-class insurance clerk who desperately hopes books will save him from the social and economic abyss. ...read more.

She was the last of the Howards; "things went on until there were no men." Ruth is the last survivor of a family that has lived on the land in one house for centuries which makes clear the pity and anger she feels when Margaret tells her that they are to loose Wickham place, the home that both Tibby and Helen were born in. "Not the house you were born in. You'll never find that again. Poor, poor girls. Howards end was almost pulled down once. It would've killed me." Mrs. Wilcox lives with and loves the Wilcoxes, yet she retains her connection to the past and to the earth, a connection that is essential to the inner life and outer life. Ruth is the only member of the Wilcox family who is traditional in her ways and sees a home as more than a property or financial gain. Mrs. Wilcox's marriage to Henry is an emblem of the traditional co-existence of the two kinds of life, a co-existence which seems to be coming to an end. The death of Mrs. Wilcox brings a literal end to the Howard Family; the question is whether the disposition of her house will bring the end of what she stands for. ...read more.

Wilcox following both her traditions and her role as spiritual heir. But Margaret seems to realize that the outer life of the Wilcoxes has become so powerful and expansive that it cannot exist peacefully beside the life of personal relations and personal emotional truth which the Schlegels girls hold so dear. She knows Wilcoxes are changing the world but wants Mr. Wilcox to see that he has an inner life. This is what Margaret tries to do in accepting Henrys proposal; she tries to merge the inner and outer lives. In conclusion, modernisation and tradition are two of the most important themes within the novel, it seems that they were apparent in the mind of Forster when he wrote the novel and he used motorcars, families and property in order to show London, and England in general and the change that it has and will endure. The novel does seem to be slightly prophetic similarly to George Orwell's 1984 in predicting the future in a very precise manor. Forster appears to have seen the eventual dominance of the commercial and financial classes, and he saw with disturbing accuracy what this dominance would do not only to England but also to the world and how it would in fact be the Wilcoxes of the world that "shall inherit the England". ?? ?? ?? ?? ...read more.