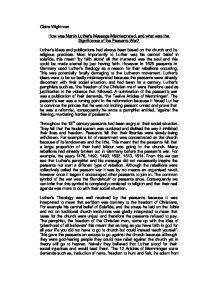 How was Martin Luther's Message Misinterpreted, and what was the Significance of the Peasants War?

Claire Wightman How was Martin Luther's Message Misinterpreted, and what was the Significance of the Peasants War? Luther's ideas and publications had always been based on the church and its religious practices. Most importantly to Luther was his central belief in solafide, this meant 'by faith alone' all that mattered was the soul and this could be made eternal by just having faith. However in 1525 peasants in Germany used Luther's theology as a reason for their rebellions occurring. This was potentially fatally damaging to the Lutheran movement. Luther's ideas were to be so badly misinterpreted because the peasants were already discontent with their social situation, and had been for a century. Luther's pamphlets such as, 'the freedom of the Christian man' were therefore used as justification in the violence that followed. A culmination of the peasant's war was a publication of their demands, 'the Twelve Articles of Memmingen'. The peasant's war was a turning point in the reformation because it forced Luther to convince the princes that he was not inciting peasant unrest and prove that he was a reformist, consequently he wrote a pamphlet entitled, 'against the thieving, murdering hordes of peasants.' ...read more.

The pamphlet, the freedom of the Christian man, came up with the idea of 'priesthood of all believers' this meant that as long as you have faith in god for all your life you did not have to go to church but could instead teach yourself. This gave the peasants an excuse to go against the church because although they were god-fearing people they could now rebel against the church yet in theory still go to heaven. Naively they believed that Luther stood for their social injustices and would lead them. The 12 Articles of Memmingen state demands such as, 'reduction of rents, freedom to hunt and fish, freedom from the small tithe.' These again only speak of social reform; this was something Luther was completely uninterested in. The peasant's war forced Luther to rethink his ideas in some ways. For example the rebellions instead of making the princes reform to Lutheranism instead portrayed Luther as somebody who stood for social reform. In contrast Luther actually strongly believed in secular authority, his political convictions were actually extremely middle-upper class. ...read more.

What they were hoping to achieve was to improve their social standing in society, and gain a better standard of life. Pamphlets such as the freedom of the Christian man which spoke of the priesthood of all believers, inferred that because all you had to gain salvation was have faith it was ok to break away from the church, taxes and prince. However in reality Luther firmly believed in secular Authority and believed that in order for the reformation to survive it would have to occur from people at the top of society such as princes and down to the bottom. Therefore he published the pamphlet, 'Against The Thieving Murderous Hordes Of Peasants' this condemned their motive for rebellions and all that went with it such as the Bundshuh. Overall we can say that the most significant thing to come out of the peasant's war was that it proved to be a turning point in Lutheranism. Luther had to turn his back on the easy support he had gained through the peasant's rebellions and instead appeal to the princes for the sake of his theology being taken into account for the right reasons. ...read more.