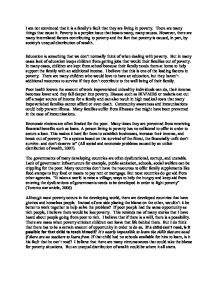 I am not convinced that it is a familys fault that they are living in poverty. There are many things that cause it.

I am not convinced that it is a family’s fault that they are living in poverty.  There are many things that cause it. Poverty is a perplex issue that boasts many, many causes. However, there are many interrelated factors contributing to poverty and the fact that poverty is caused, in part, by society's unequal distribution of wealth.

Education is something that we don’t normally think of when dealing with poverty.  But in many cases lack of education keeps children from getting jobs that would their families out of poverty. In many cases, children are kept from school because their family needs them at home to help support the family with an additional income.  I believe that this is one of the leading factors in poverty.  There are many children who would love to have an education, but they haven’t additional resources to survive if they don’t contribute to the well being of their family.

Poor health lowers the amount of work impoverished unhealthy individuals can do, their income becomes lower and they fall deeper into poverty. Disease such as HIV/AIDS or malaria can cut off a major source of income for a family and can also result in high medical costs that many impoverished families cannot afford or even death.  Community awareness and immunizations could help prevent illness.  Many families suffer from illnesses that might have been prevented in the case of immunizations.

Economic choices are often limited for the poor.  Many times they are prevented from receiving financial benefits such as loans. A person living in poverty has no collateral to offer in order to secure a loan. This makes it hard for them to establish businesses, increase their income, and break out of poverty. ”In a system based on the survival of the fittest, the financially unfit don't survive--and don't deserve to” (All social and economic problems caused by an unfair distribution of wealth, 2007).

The governments of many developing countries are often dysfunctional, corrupt, and unstable. Lack of government infrastructure for example, public sanitation, schools, social welfare can be crippling for the poor. Many countries don’t have the resources to offer family supplements like food stamps to buy food or means to pay rent or mortgage. But most countries do get aid from other agencies.  “It takes a world to raise a village; ways to help the hungry and keep aid from entering the dysfunctions of governments needs to be developed in order to fight poverty” (Toronto star article, 2006)

Although most poverty occurs in the developing world, there are developed countries that have ghettos and homeless people.  Instead of one side placing the blame on the other, wouldn’t it be better to work together to help solve the problem?  If poor people had the same opportunity as rich people, I believe there would be less poverty.  This reminds me of many stories that I have heard about people going from poor to rich.  I believe that if there is a will, there is a possibility.  There are cases when poverty stricken children can leave that life behind them.  But I do think that there has to be a certain amount of opportunity in order to do so.  If a child can’t read, is it possible for that child to teach himself?It’s nearly impossible to learn the skills that are need if there are no teachers to learn from. If that child had no schools available for him to learn, is it his fault that he can’t read?  I believe that there are many circumstances that could take the blame for poverty situations.  But an unequal distribution of wealth could be where it all starts.

All social and economic problems caused by an unfair distribution of wealth (2007) retrieved December 19, 2007 from Reference site: http://www.policyalternatives.ca/index.cfm?act=news&call=635&do=article&pA=BB736455