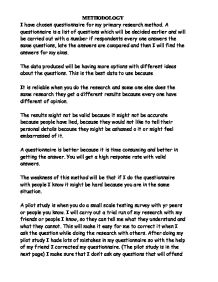 I have chosen questionnaire for my primary research method. A questionnaire is a list of questions which will be decided earlier and will be carried out with a number if respondents every one answers the same questions,

METHODOLOGY I have chosen questionnaire for my primary research method. A questionnaire is a list of questions which will be decided earlier and will be carried out with a number if respondents every one answers the same questions, late the answers are compared and then I will find the answers for my aims. The data produced will be having more options with different ideas about the questions. This is the best data to use because It is reliable when you do the research and some one else does the same research they get a different results because every one have different of opinion. The results might not be valid because it might not be accurate because people have lied, because they would not like to tell their personal details because they might be ashamed o it or might feel embarrassed of it. A questionnaire is better because it is time consuming and better in getting the answer. You will get a high response rate with valid answers. The weakness of this method will be that if I do the questionnaire with people I know it might be hard because you are in the same situation. A pilot study is when you do a small scale testing survey with yr peers or people you know. I will carry out a trial run of my research with my friends or people I know, so they can tell me what they understand and what they cannot. ...read more.

Here are the different types of families in modern Britain except nuclear family Lone parent family: this type of family has once parent bringing up their own children Reconstituted family: this type of family is a formed when at least one of the love partners in a marriage or permanent relationship has children previous relationships (a step family). Extended family: a family in a group of three or more generations extended express the continuity of the family by recognising that when some one marries and has a family in to which he or she was born extended families members include grand parents, aunties, cousins, in-laws. Cohabiting couple family: the family formed by a couple who whilst living to gather in stable relationship and are not married There are different families because it so easy to separate people and identify what type of family they belong to. My theory is that functionalities argue that nuclear family is the best type of family in which parents need each other for love and support in order to be able to cope up with the demands of bringing up the children. In the 1980's a new of family was suggested by people who come from the new right. The new right agreed with the functionalist view that the nuclear fami8ly was the best family type. The new right view suggests that if children are to develop in to stable healthy adults, they must be bought up by married parents. ...read more.

Parents can love and support each other. PRIMARY RESEARCH SECENDARY RESEARCH I found an information in a book which told us that there are more divorces in Britain since 1961 to 1990and the divorce rate has increased from 2.1 to 12.9.Tsociologists have argued that there should be more nuclear families in Britain because it the single parent families are having more difficulties in the family because that have to take care of every thing and they will not have any help of any one to share there work lode. This might led the parents to a situation where they have to not take much care of their children. Ann Oakley important feminist sociologist conducted a small scale study of the house holds surveys entitled the sociology of house work. She treated housework as work. She found that housework as having low status despite the fact that an average such workers work for 77 hours per week. She linked this low status to the fact that most hours work is done by women. Years 1961 1971 1981 1989 1990 Total divorces (decrees absolute granted in UK thousands) 27 80 157 164 168 Divorce rate (person divorcing per thousand married) 2.1 6.0 11.9 12.7 12.9 This is a table that I found in a book family and marriage chapter 8. This table tells us that there was a high rate of divorce in UK. In the year 1961 there were 27 divorces and in 1971 there were 80 divorces. ...read more.