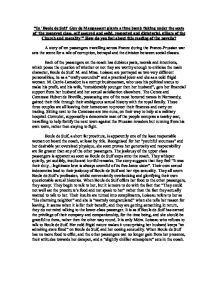 &quot;In 'Boule de Suif' Guy de Maupassant plants a time bomb ticking under the seats of 'the moneyed class, self assured and solid, respected and dictatorial, pillars of the Church and morality'&quot; How do you feel about this reading of the novella?

"In 'Boule de Suif' Guy de Maupassant plants a time bomb ticking under the seats of 'the moneyed class, self assured and solid, respected and dictatorial, pillars of the Church and morality'" How do you feel about this reading of the novella? A story of ten passengers travelling across France during the Franco-Prussian war sets the scene for a tale of corruption, betrayal and the division between social classes. Each of the passengers on the coach has dubious pasts, morals and intentions, which poses the question of whether or not they are worthy enough to criticise the main character, Boule de Suif. M. and Mme. Loiseau are portrayed as two very different personalities, he as a "crafty scoundrel" and a practical joker and she as a cold frigid woman. M. Carrie-Lamadon is a corrupt businessman, who uses his political status to make his profit, and his wife, "considerably younger then her husband", gets her financial support from her husband and her sexual satisfaction elsewhere. The Comte and Comtesse Hubert de Breville, possessing one of the most honored names in Normandy, gained their title through their ambiguous sexual history with the royal family. These three couples are all leaving their hometown to protect their finances and carry on trading. ...read more.

The other passengers soon decide to plot against Boule de Suif, whilst she is out, to try and persuade her that by sleeping with the Prussian, she is doing the right thing. The articulate, well-educated travellers conspire to use these oratorical skills to gradually persuade Boule de Suif and manipulate her to get her to do what they want her to. Eventually, "they found delicacies of phrase and charming subtleties for the coarsest of ideas" and convince Boule de Suif that she should have sex with the Prussian by using examples of great martyrs who sacrificed themselves to do what is right, and even the nuns contribute. When they are asked by the Comtesse, in front of Boule de Suif, if they "think God accepts any means and pardons any deed, when the motive is pure?" one replies, "Who can doubt it, Madame?". They actually seem to enjoy exploiting the vulnerable Boule de Suif; "they revelled...tremendously thrilled...stimulated with the sensual pleasure". All of their stories and revelations eventually round off to one "final conclusion...a women's only duty was the continual sacrifice, the perpetual surrender of her body to the lust of a licentious soldiery". ...read more.

The writer is trying to say that the corrupt upper class use and exploit the honest working class to get what they want. As he writes in the story "It is the rich who make wars" and the poor who they make fight it for them. I think the writer uses the story to put his ideas across well. It is represents French society in 19th century France and, in some circumstances, is still very relevant even in the present day. Even though the divide between the upper class and working class is more obscure in modern day, the practice of the rich exploiting the poor is still visible. I like the way Guy de Maupassant cleverly uses irony to first build up the picture of how the upper class are perceived to be and then slowly tears this illusion apart as the characters become gradually more corrupt and interest only in themselves and their gain. That is how I think that "In 'Boule de Suif' Guy de Maupassant plants a time bomb ticking under the seats of 'the moneyed class, self assured and solid, respected and dictatorial, pillars of the Church and morality", because they only appear respectable for so long, before their true characters are exposed. ...read more.