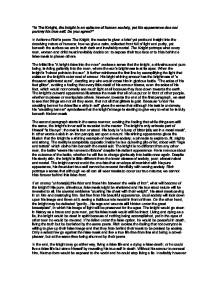 In The Knight, the knight is an epitome of human society, yet his appearance doe not portray his true self. Do you agree?

"In The Knight, the knight is an epitome of human society, yet his appearance doe not portray his true self. Do you agree?" In Adrienne Rich's poem The Knight, the reader is given a brief yet profound insight into the deceiving nature of humans; how we give a calm, collected front full of light and purity, yet beneath the surface we are in truth dark and inevitably mortal. The Knight portrays what every man, woman and child must inevitably decide on: to expose their true face or to hide behind a false mask to please others. The initial line "A knight rides into the noon" evokes a sense that the knight, a chivalrous and pure being, is riding gallantly into the noon, where the sun's brightness is at its apex. When the knight's "helmet points to the sun", it further reinforces the first line by exemplifying the light that exists on the knight's outer coat of armour. His bright shining armour has the brightness of "a thousand splintered suns", dazzling any who would cross him in glorious battle. ...read more.

His body is "a lump of bitter jelly set in a metal mask", in other words a slob in an iron panoply set upon a mount. His shining appearance gives the illusion that the knight is a shining example of medieval society; a pinnacle to aspire to, fit, mighty and strong. The reality is completely opposite; inside he is a quivering pile of fat, robed with "rags and tatters" which clothe him beneath the metal suit. The knight is no different from any other man, the battle "wears his nerves to ribbons" despite his radiant appearance. He is nervous about the outcome of the battle, whether he will live to charge gloriously into battle once again. Despite his steely skin, the knight is little different from the lower classes of society, poor, almost naked and mortal. The knight cannot avoid the one fate that envelops all mankind with his pure appearance, his fraudulent true self cannot be covered fancifully with wooing society. ...read more.

If he fallen under the false option, he would be peaceful in death, living the truth but be banished by the same peers. Rich evokes the feeling that not everyone is willing to give up their false image and that they hide behind their mask to be praised by society. Only a select few go against the false mask and live a true life free from lies and being a crowd-pleaser, but at the same time being shunned by their peers. In the end, the knight may go either way, living a false life and a dying a false death; or he could live a false life but atone himself by revealing his true self in death. Without his armour to conceal him, his true form would be exposed to the world and he could stop living a lie. Inevitably however it is out of his hands, he cannot choose whether or not to shatter his own armour in an intense battlefield. However, the knight's true form might be known, and he might find that one measure of peace that all people seek, in death, at last. ...read more.