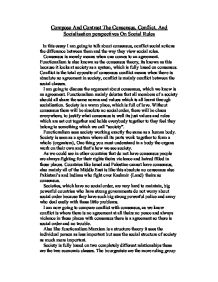 In this essay I am going to talk about consensus, conflict social actions the difference between them and the way they view social roles.

Compose And Contrast The Consensus, Conflict, And Socialisation perspectives On Social Rules In this essay I am going to talk about consensus, conflict social actions the difference between them and the way they view social roles. Consensus is merely means when one comes to an agreement. Functionalism is also known as the consensus theory, its known as this because it looks at society as a system, which is fully based on consensus. Conflict is the total opposite of consensus conflict means when there is absolute no agreement in society, conflict is mainly conflict between the social classes. I am going to discuss the argument about consensus, which we know is an agreement. ...read more.

Countries like Israel and Palestine cannot have consensus, also mainly all of the Middle East is like this absolute no consensus also Pakistani's and Indians who fight over Kashmir {Land} theirs no consensus. Societies, which have no social order, are very hard to maintain, big powerful countries who have strong governments do not worry about social order because they have such big strong powerful police and army who deal easily with these little problems. I am now going to compare conflict with consensus, as we know conflict is where there is no agreement at all theirs no peace and always violence in these places with consensus there is a agreement so there is social order and no trouble. ...read more.