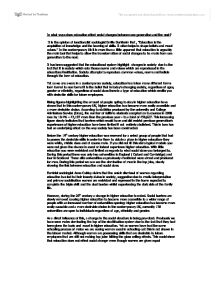 In what ways does education effect social changes between one generation and the next?

In what ways does education effect social changes between one generation and the next? It is the opinion of functionalist sociologist Emille Durkheim that , "Education is the acquisition of knowledge and the learning of skills. It often helps to shape beliefs and moral values." In the contemporary Uk it is more than a little apparent that education is arguably the main tool that helps to allow the transformation of social changes to be made from one generation to the next. It has been suggested that the educational system highlight changes in society due to the fact that it is society which sets theses norms and values which are reproduced in the educational institution. Society attempts to reproduce common values, norms and beliefs through the form of education. Yet as we are aware in a contemporary society, education has taken many different forms- form formal to non formal it is the belief that in today's changing society, regardless of ages, gender or ethnicity, regardless of social class there is a type of education which credits you with desirable skills for future employees. Rising figures highlighting the amount of people opting to stay in higher education have shown that in this contemporary UK, higher education has become more easily accessible and a more desirable choice. ...read more.

Because the system of education arises from the common beliefs of society's members, it is a product of collective, not individual, thought. Thus, a system of education, being a product of the collectivity, necessarily embodies those values that are expressed by the conscious collective. As a society's collective values change, the educational system reflects these changes. Durkheim points out this tendency as he comments on the relationship between education, religion, and society's ideal view of a human being: "Our conception of the goal has become secularised; consequently the means employed themselves must change. Otherwise, the system would be teaching values inconsistent with society, possibly leading to its own demise. "What point is there," Durkheim asks, "in imagining a kind of education that would be fatal for the society that put it into practice?" . Education socialises young people for adult roles. According to Talcott Parson's Functionalism individuals interact with each other through the medium of social structures. They accept common standards of evaluation, which are moral standards or 'norms'. Sociological processes maintain these structures, and ensure stability through adherence to the norms. This is called a 'structuralist-functionalist' approach to social systems analysis. ...read more.

If, for example, during a certain era, society had made social status contingent upon birthright, the educational system would likely reflect this, perhaps by admitting only those from the higher social levels into the prestigious educational institutions. Later, society may come to value merit, with each person gaining access to the higher-level or prestigious institutions through examination rather than birthright. Yet the imprint, the residue, of the aristocratic system is likely to still exist in the educational system in some subordinate manner or marginal form. Perhaps there was, for example, a useful aspect of the old system that has been retained by the new. Systematically tracing the imprints left by such changes in the educational system reveal underlying shift's in society's organization and values. Indeed, Durkheim would say, the aspects of the old educational system retained by the new one are those that are still representative of society's values, although perhaps only marginally. The past has contributed, as Durkheim points out, to the formation of the principles that guide education. The principles that guide education, in turn, reflect the values of society. Thus, Durkheim believed, "studying the history of education, relating educational change to wider cultural, social and economic changes, would enable one to `anticipate the future and understand the present.'" ...read more.