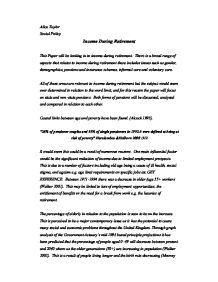 Alice Taylor Social Policy Income During Retirement This Paper will be looking in to income during retirement. There is a broad range of aspects that relates to income during retirement these includes issues such as gender, demographics, pensions and insurance schemes, informal care and voluntary care. All of these areas are relevant to income during retirement but the subject would seem over determined in relation to the word limit, and for this reason the paper will focus on state and non-state pensions. Both forms of pensions will be discussed, analysed and compared in relation to each other. Causal links between age and poverty have been found. (Alcock 1993). "26% of pensioner couples and 35% of single pensioners in 1992-3 were defined at being at risk of poverty" Haralambos &Holborn 2000 :312 It would seem this could be a result of numerous reasons. One main influential factor would be the significant reduction of income due to limited employment prospects. This is due to a number of factors including old age being a cause of ill health, social stigma, and ageism e.g. ...read more.

Modern day pensions are still influenced by these recommendations (Hill 2000). The national insurance contribution system was a form of nationalization. The idea was that the employed public of Britain was paying money out of there earnings to benefit the needs of people more disadvantaged financially e.g. elderly. As the birth rate is decreasing and people are living longer, there are going to be less workers to finance the benefits and a big increase in demand of state pensions from the elderly. There is also a increase in the chance of individuals needing pensions as peoples life expectancy is high. This in turn has stimulated long-term concern with the future provision of state pensions and the possibility of a break down in the pension scheme. It is one of the main social policy issues (Walker 2001) Everyone of the correct retirement age (60 for women, and 65 for men) is entitled to a state pension. This ensures equality and promotes the well being of every one within this particular age group. The government through national insurance contributions of younger generations ensures that everyone legible for a pension has a regular basic income, which aims to provide basic necessities (Spicker 1995). ...read more.

Private pensions conclusively distribute more money to those who are already financially well off and therefore favour rich and disadvantage poor. Although pension provision has significantly progressed and developed since the 18th Century there is stillroom for vital improvement. With the risk of pension money running out it would there fore seem that a scheme does need to be worked out to ensure a stable pension provision for the future weather this state or non-state whilst considering the link of age and poverty. A good pension scheme would be the a good start of tackling poverty throughout the elderly. Leaving this system how it is could lead to an increase in poverty. If pension privatisation in the future was the main source of income during retirement it would seem crucial that means tested pensions were enforced to provide to those that require extra benefits. This would insure the financially worst off had more pension and the financially well off had to provide there own. The government could also introduce for emergency non-permanent measures workers contributing to the present pensions and there own in the future. ...read more.