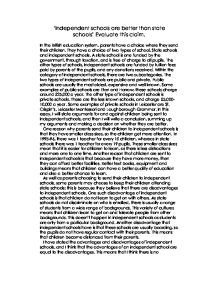 ‘Independent schools are better than state

One reason why parents send their children to independent schools is that they have smaller class sizes, so the children get more attention. In 1995-96, there was 1 teacher for every 10 children, whereas in state schools there was 1 teacher for every 19 pupils. These smaller class sizes mean that it is easier for children to learn, as there is less distractions and more one to one time. Another reason that children are sent to independent schools is that because they have more money, then they can afford better facilities. Better text books, equipment and buildings means that children can have a better quality of education and also a better chance to learn.