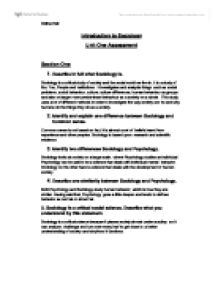 Introduction to Sociology - questions and answers

Introduction to Sociology Unit One Assessment Section One 1. Describe in full what Sociology is. Sociology is a critical study of society and the social world we live in, It is a study of Me, You, People and Institutions. It investigates and analysis things such as social problems, social behaviour, culture, culture differences, human behaviour as groups and also on larger more predominant behaviour as a society on a whole. This study uses a lot of different methods in order to investigate the way society works and why humans do the things they do as a society. 2. Identify and explain one difference between Sociology and Common sense. Common sense is not based on fact, it is almost a set of beliefs learnt from experience and other peoples. Sociology is based upon research and scientific evidence. 3. Identify two differences Sociology and Psychology. Sociology looks at society on a large scale, where Psychology studies an individual. Psychology can be said to be a science that deals with individual mental behavior. Sociology on the other hand a science that deals with the development of human society. 4. Describe one similarity between Sociology and Psychology. Both Psychology and Sociology study human behavior, which is how they are similar. Having said that, Psychology goes a little deeper and tends to defines behavior as normal or abnormal. ...read more.

2. Identify two social institutions involved in the process of secondary socialisation. * Educational institutions: Secondary School/University * Religion: Unified beliefs 3. Describe one norm of learner action within a class room. One norm of a learner action in a classroom would be to conduct yourself in a "Student" manner, which consists of taking a seat, listening, take instructions, feed in information. 4. Describe why sociologist suggests that human behaviour is best understood as learnt rather than 'natural'. Sociologist suggest human behaviour is learnt because there is nothing in our natural instinct or genetic make-up that suggests humans are forced to behave in certain ways, for example kind or aggressive. From birth we have natural instinct elements which are to sleep and eat, if there was more to our natural instincts the population of the world's behaviour would not differ so much and would be continuous. This shows us there are things we learn and are taught. As time goes by people change, things change around us and we adapt and learn the behaviour as well as being shown. Section Three 1. Describe at least two features of the following sociological theories Functionalism * Functionalist believes society is a system formed of different bits. * Society is held together by consensus order. a) Marxism * Is a structural conflict theory which believes society is divided into two parts, Economic Base/Infra Structure & Superstructure * Believes everything to so with society starts from the Economy. ...read more.

Disadvantages are people are aware they are taking part in an experiment so the answers they give could be dis-honest. Also as it may be fixed question questionnaires participants would not be able to express their views in full. 6, Describe what quantitative analysis is. This is a study of content referring to pictures or text. With this method the researcher would use existing information to produce quantitative data based on what it is they are studying. 7. Take one of the following research areas: a) Identify and describe one appropriate research method to investigate the issue. Relationship between gender and educational achievement a) Identify and describe one appropriate research method to investigate the issue. A research method that could be used for this study could be to analyze Secondary Data such as government statistics. b) Using what you understand about the strengths of the method present a justification for your choice. By doing this the researcher can use data already existing to compare and contrast. Quantitative data maybe looked at for example government statistics and charts which would provide an established degree of validity and reliability. Secondary Data provides useful background historical data on people which makes this method the choice I would use. c) Describe the possible weaknesses in using the method. The data being looked at could actually be incomplete which would not be very resourceful for the researcher. Also the data maybe out of date. ?? ?? ?? ?? Selina Hall ...read more.