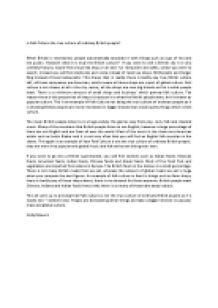 Is Folk Culture the true culture of ordinary British people?

﻿Is Folk Culture the true culture of ordinary British people? When Britain is mentioned, people automatically associate it with things such as cups of tea and the queen. However what it is truly the British culture? If you were to visit a British city it is very unlikely that you would find a local tea shop or an own run restaurant and cafes, unless you were to search. Instead you will find starbucks and costa instead of local tea shops, McDonalds and Burger King instead of local restaurants. This shows that in reality there is hardly any true British culture left, all these companies are American, which means all these shops are a part of global culture. ...read more.

This is an example of Folk Culture not being the true culture of ordinary people as it is showing British people are more interested in bigger brands than small quirky things which is folk culture. The music British people listen to is a huge variety the genres vary from pop, rock, folk and classical music. Many of the musicians that British people listen to are English, however a huge percentage of them are not English and are from all over the world. Most of the music in the charts are American artists such as Justin Bieber and it is not very often that you will find an English folk musician in the charts. ...read more.

The British food on the shelves is a small percentage. There is not many British meals that we eat, whereas the amount of global meals we eat is huge when you compare the two figures. An example of folk culture in food is things such as farm shops, there is hardly any of these shops about, there is no demand for them anymore. British people want Chinese, Indiana and Italian foods hence why there is so many of these take away?s about. This all sums up to proving that Folk culture is not the true culture of ordinary British people as it is nearly non ? existent now. People are demanding other things and take a bigger interest in popular, mass and global culture. Holly Blowers ...read more.