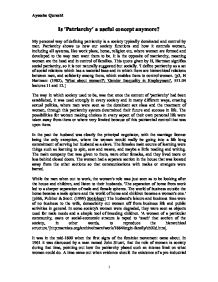 Is 'Patriarchy' a useful concept anymore?

Is 'Patriarchy' a useful concept anymore? My personal way of defining patriarchy is a society typically dominated and control by men. Patriarchy shows us how our society functions and how it controls women, including all systems, like work place, home, religion etc, where women are formed and developed to the way men want them to be. It is the opposite of matriarchy, meaning women are the head and in control of families. This quote given by H, Hartman signifies social patriarchy, so it is not naturally suggested but socially. 'I define patriarchy as a set of social relations which has a material base and in which there are hierarchical relations between men, and solidarity among them, which enables them to control women. [p3, H Hartman: (1982), 'What about women?'; 'Gender Inequality in Employment', 551.04 leatures 11 and 12.] The way in which society used to be, was that once the content of 'patriarchy' had been established, it was used strongly in every society and in many different ways, creating sexual politics, where men were seen as the dominant sex class and the treatment of women, through this patriarchy system determined their future and success in life. The possibilities for women making choices in every aspect of their own personal life were taken away from them or where very limited because of this patriarchal control that was upon them. In the past the husband was clearly the principal negotiator, with the marriage license being the only exception, where the women would really be going into a life long commitment of serving her husband as a slave. ...read more.

It was not until the 1980s that these requirements changed, when recruitment practices of certain companies had referred to the Equals Opportunities Commission. The position of men was altered and the women's position underwent significant changes. More women moved into the labour market and were used less in the homes. With the changing of attitudes towards means of the production, families began to drop away from the ways and ideas of 'male ownership' with society and the changing attitudes of women's role became stronger. Society needed women to work as men could not fill all the vacancies and they needed women to do the jobs that men would not. More opportunities for young children to go to school were given. 'Private housekeeping is transformed into a social industry. The care and education of the children became a public affair; society looks after all children alike, whether they are legitimate or not'. [p170, Jodi Dean. (1997) Feminism and the New Democracy] Changes in women's employment have had consequences that we still do not know what will happen in a situation involving children, marriages and other important factors in ones individual life. Countries that have high birth rates now have low birth rates, due to women working. Dramatic changes have also taken place, such as divorce rates rising and single mothers increasing. Organizations themselves are re-thinking employing different work time and working practice; because number of paid work and taking care of unpaid domestic and family work has increased as men have to also help now. ...read more.

However some may not see it as useful, as facts have shown that the top politicians and scientists are men. Work hours still have had seen to be problems for women. In Britain inequality is illegal but still is happening in other parts of the country, and men still oppress women. Sometimes society promotes sex- stereotyped roles themselves when it is unnecessary, for example in some cultures there is more of a celebration when a baby boy is born, or when children are a bit older society places them into their sex roles, e.g. to praise them we say things like "that's pretty for a good girl" or to a boy it is said " you do that like a girl", or "boys don't cry". We are teaching girls to be feminine, and boys are taught to be masculine, by being tough and insensitive. My conclusion to this essay from reviewing the facts I have gained, is that patriarchy is seen more as useful concept in society today despite the negative elements. I would personally say that women today still depend on certain patriarchal concepts to enable them to gain security within their lives, however this is not true for everyone. During this essay I have covered a range of topics to with patriarchy. In my essay I have concentrated on four aspects, I have defined the term 'patriarchy'; I have talked about how society was how society has changed, and discussed if patriarchy still is a useful concept. I have produced this with relevant evidence in a form of quotes. ...read more.