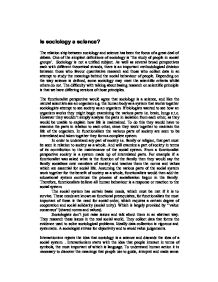 Is sociology a science?

Is sociology a science? The relation ship between sociology and science has been the focus of a great deal of debate. One of the simplest definitions of sociology is 'the study of people in social groups'. Sociology is not a unified subject. As well as several broad perspectives each with different theoretical strands, there is an important methodological division between those who favour quantitative research and those who collect data in an attempt to study the meanings behind the social behaviour of people. Depending on the way science is defined, some sociology may meet the scientific criteria whilst others do not. The difficulty with talking about basing research on scientific principle is that we have differing versions of those principles. The functionalist perspective would agree that sociology is a science, and like the natural scientists see an organism e.g. the human body as a system that works together sociologists attempt to see society as an organism. If biologists wanted to see how an organism works they might begin examining the various parts i.e. brain, lungs e.t.c. However they wouldn't simply analyse the parts in isolation from each other, as they would be unable to explain how life is maintained. ...read more.

However, believed that the suicide rate was determined by the relationships between individuals and society. To do this Durkheim first tried to show that suicide rates were relatively stable in a particular society over a period of time. He studied European societies and found consistent variations in the suicide rate between different groups within the same society. He believed it was impossible to explain these patterns if suicide was seen solely as personally and individual act. He then went on to establish correlations between suicides and other sets of social facts. He found that suicides were higher in predominantly protestant countries than catholic ones, and Jew had an even lower rate than Catholics. He believed that the suicide rates were dependant upon the degree to which individuals were integrated into social groups and the degree to which society regulated individual behaviour. Durkheim's study of suicide has widely been criticised by Social the interactionists J.D. Douglas and J.M. Atkinson. They both feel that suicide statistics, like any other statistics are socially constructed and questions their reliability. Douglas saw suicide statistics as the result of negotiations between the different parties involved. ...read more.

On the other hand, human societies a open systems and therefore it would be very difficult to control variables because of this it is difficult to see how theories can be falsified. Another philosopher of science Thomas Kuhn believes normal science operates within a paradigm - a shared framework of concepts and theories. The paradigm is shaped by members of the scientific community and shapes the way they see the world. Scientists operate within the paradigms and refuse to accept concepts that falsify the paradigm until they cannot be ignored. When a paradigm is replaced with another (scientific revolution) it is because the theory cannot be explained in terms of the existing paradigm. Kuhn says that because all sociologists do not share the same paradigm and hold very different concepts, theories and methods. Sociology is pre-paradigmatic and pre- scientific. Thus sociology is not a science. Given the weight of this argument it suggests the relationship between sociology and science is an ambiguous one. There is no agreement as to what is a 'science'. Depending on the definition sociology is either scientific, unscientific or scientific in parts. It is not likely that there will be any agreement as to what 'science' is, nor is it likely that sociology will develop a paradigm. Therefore it is safe to suggest that sociology is not a science. ...read more.