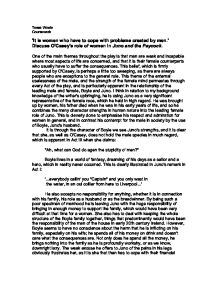 'It is women who have to cope with problems created by men.' Discuss O'Casey's role of women in Juno and the Paycock.

Tessa Weale Coursework 'It is women who have to cope with problems created by men.' Discuss O'Casey's role of women in Juno and the Paycock. One of the main themes throughout the play is that men are weak and incapable where most aspects of life are concerned, and that it is their female counterparts who usually have to suffer the consequences. This belief, which is firmly supported by O'Casey, is perhaps a little too sweeping, as there are always people who are exceptions to the general rule. This theme of the enternal uselessness of the male, and the strength of the female mind permeates through every Act of the play, and is particularly apparent in the relationship of the leading male and female, Boyle and Juno. I think in relation to my background knowledge of the writer's upbringing, he is using Juno as a very significant representative of the female race, which he held in high regard. He was brought up by women, his father died when he was in his early years of life, and so he combines the many character strengths in human nature into the leading female role of Juno. This is cleverly done to emphasise his respect and admiration for women in general, and in contrast his contempt for the male in society by the use of Boyle, Juno's husband. It is through the character of Boyle we see Juno's strengths, and it is clear that she, as well as O'Casey, does not hold the male species in much regard, which is apparant in Act III when she claims: "Ah, what can God do agen the stupidity o' men?" ...read more.

He has no positive thoughts for her, in contrast to Juno who provides much needed support by accompanying her to the doctor's etc. Even though earlier on in the play when Mary was stronger, Juno had scolded her about her vanity, when she is in trouble and is pregnant, Juno defends her to the point where she would leave her husband, showing tremendous strength of character. The prejudices against unmarried mothers in the early 20th century were clearly seen by Juno and she was determined to stick by her. In that society Mary would have lost much of her social integrity and credibilty when she became pregnant. It is likely that most other women would also have adopted Juno's attitude but unfortunately this was not the way that most men thought in those troubled times. This insensitivity was also shown by her brother Johnny who claims, "She shoulds be dhriven out o' th' house, she's brought disgrace on!" Johnny also demonstrates this lack of passion further when he blames the removal of the furniture on Mary. At such a difficult stage in her life, where she must of been in a complete state of turmoil, by using the fact that Johnny (a man) forces this huge problem on her shoulders, is also very significant to O'Casey's portrayal of women suffering as a result of actions done by men. However we can perhaps lighten our contempt a little as it is very apparent that Johnny is in no sound state of mind, whether or not he is exaggerating it. ...read more.

In Juno's case her determined attempts at keeping her family together are further highlighted by her husband's constant state of drunken oblivion. Also, the huge problems suffered by women are not only inflicted by dominant male parts in the play. For example the "rough voice" that delivers the news to Juno and Mary that Johnny is dead, I believe, is another attempt by the writer to symbolise male arrogance, and their attitude of impatience towards the women in Ireland at that time, as displayed in the quotation: 'Are yous going' to keep us waitin' for yous all night?' At the end of the play it dramatically finishes with Joxer and Boyle only having each other. This is possibly justice for them in that they both deserve only the other's drunken and foolish company. Boyle has already ruined the remainder of whatever life Juno could possess, and she has wisely broken free from her husband's oppression and turns out the be the admirable heroine of the play. This is the ultimate controversial point as at the time of a very male-dominated society, O'Casey dared to write this, and not a member of the opposite sex, as one may well think. It is important to realise that O'Casey had a slightly biased view. When he was a child, his father died in 1886, and the sickly, weak-eyed boy was raised by his mother who came to personify the unsung heroines of oppression in many of his plays.While this is a play of its time showing the social mores and attitudes of a particular era in Dublin life, O'Casey's representation of prejudice and inequality is still significant to us today. ...read more.