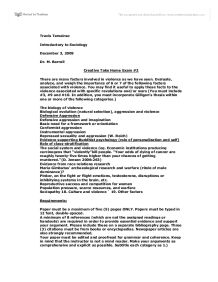 Travis Tameirao Introductory to Sociology December 3, 2009 Dr. M. Barroll Creative Take Home Exam #2 There are many factors involved in violence as we have seen. Evaluate, analyze, and weigh the importance of 6 or 7 of the following factors associated with violence. You may find it useful to apply these facts to the violence associated with specific revolutions and/or wars (You must include #3, #9 and #10. In addition, you must incorporate Gilligan's thesis within one or more of the following categories.) The biology of violence Biological evolution (natural selection), aggression and violence Defensive Aggression Defensive aggression and imagination Basic need for a framework or orientation Conformist aggression Instrumental aggression Repressed sexuality and aggression (W. Reich) Evidence supporting Buddhist psychology (role of personalization and self) Role of class-stratification The social system and violence (eg. Economic institutions producing carcinogens that "violently"kill people. "Your odds of dying of cancer are roughly twenty-five times higher than your chances of getting murdered."(D. Jensen 2006:263) Evidence from race relations research Maria Gimbutas' archaeological research and warfare (r0ole of male dominance)? Pinker, on the fight or flight emotions, testosterone, disruptions or inhibitying systems in the brain, etc. ...read more.

Instrumental aggression is aggression that is a means to some other ends. Defensive aggression is the act of protecting oneself in a circumstance that draws out a call for defense. Defensive aggression can take on many different classifications and meanings, but primarily it tends to have a understanding that one uses defensive aggression when provoked. A person who beeps their horn in the car to protect themselves from a car close to making a collision is a form of defensive aggression, punching back after being hit by another person, yelling back at another person who is verbally attacking, etc. This type of aggression relates to James Gilligan's thesis in a sense where those in the American prisons were in all some form performing a combination of "instrumental and defensive aggression" even if it was indirectly. To be violent was an essential tool to survival in prison, and in this case being defensive was essential to surviving against other attacks from other inmates. Gilligan proposed that in order to survive one must be instrumental, and defensive; as when one attacks "you must fight back" and to not be attacked one must demonstrate instrumental violence and attack others to show dominance. ...read more.

( Gilligan, James. Violence our deadly epidemic and its causes) This ultimately causing people of the lower class to feel ashamed and inferior to the higher class. James discusses about how shame is the feeling that leads ultimately for the lack of "dignity". After people are treated like nothing and suffer humiliation, people ask themselves "how does a man become more than nothing, or become visible?" the answer to this is "violence". The main concepts of what James argues is the only way to do away with structural violence which ultimately inflicts behavioral violence; is to do away with "shaming" of the lower class, as it is a deprivation of dignity, and visibility to society. "It is the gap or disparity between wealth and income to those at the top and those at the bottom of the social hierarchy that is a much more powerful cause of feelings of inferiority and shame than is absolute poverty." (Gilligan, James. Violence our deadly epidemic and its causes ) Where the political elite are the ones who don't suffer from the shaming as there is no class looking down on them. This resulting in the mass epidemic of violence in the United States and almost every other country and society in the world. ...read more.