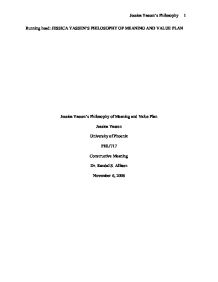 Running head: JESSICA YASSEN'S PHILOSOPHY OF MEANING AND VALUE PLAN Jessica Yassen's Philosophy of Meaning and Value Plan Jessica Yassen University of Phoenix PHL/717 Constructive Meaning Dr. Randal S. Allison November 6, 2006 Abstract As a leader in today's society individuals need to have an understanding and an approach outlined to describe their meanings and values in life. An application plan describes personal experiences and outlooks, philosophies on life, ethical standards, values, along with personal career plans and growth. This paper demonstrates the author Jessica Yassen's approach to meaning and value along with her application plan. This plan will describe how Jessica Yassen will apply her philosophies guided by theories from philosophers in the traditional era such as Aristotle, modern era such as Descartes to Wittgenstein, and postmodern era such as Derrida, Foucault, and Rorty. This plan will be revised as postmodernism continues to be redefined through the creation of new paradigms in society. Jessica Yassen's Philosophy of Meaning and Value Plan Meaning, significance, importance, value, worth is a debatable issue. Meaning is a quality inherent in something independent of an individual who considers something meaningful. The sections that follow are from the author's own set of values and meanings. While she attempts to argue her case convincingly she knows that this is all just one point of view and can be discounted as such. Approach to Meaning and Value The author's perspective and value system believes that there is no meaning in unity that has any relevance to the personality. ...read more.

The belief system of the mediator is crucial in their ability to meditate. Some belief systems are not useful and too much identification with self-analysis unconsciously creates its own problems as demonstrated by those who struggle in meditation. Surrender, acceptance, self-love are the context in which the application of personality tools and a moderate amount of self-analysis can facilitate more effective meditation. Meditation can be used to avoid facing the issues that interfere with melting and can help society notice, accept, and work through the same issues. If someone is content and relaxed in life then he or she is probably melting in life and so will melt more completely in meditation. Future Plans and Ambitions The author's career plans and ambitions are determined by several factors. These factors are based on her family, education, resources, and potential growth opportunities in her career path. Her first step is to familiarize herself with various options available. Once she has determined which career option entices her the most, she will find a course to help take her to her goal and determine preparations needed to achieve her goal. To be effective in her career plan, the author must lay out both long-term and short-term goals. The short-term goals are building blocks towards the larger long-term goal. Some of the short-term goals will include course work, training, and preparation required to achieve the ultimate goal. As the author grows, she realizes that her goals may change. This will be factored in her decision-making process. ...read more.

In order to respond positively to difficult events in life many people use the concept that such difficulties are meant to be and that they offer learning opportunities. There is a sense that their life is heading in a particular direction or to a particular goal and challenging situations are stepping-stones on the way perhaps guided by some universal intelligence. These attitudes help integrate survivable challenges but struggle to withstand lethal situations and seem trite in the face of the worst of human tragedy or abuse. Conclusion Many discussions of enlightenment will give the impression that through its realization the truth is known and that there is no mystery left. While the realization of the eternal state of unity that is enlightenment means that in that state there is no mystery, the truth of that state is known absolutely; the utter simplicity of this state can only answer questions that pertain to duality and life with a deep contented wisdom that things are as they are. Society can not reach closure in life nor finish the narrative of everyone's lives because there is and always will be another perspective, always something unconsidered, or unknown. Only in unity is there such closure since unity has the simplest of narratives that never changes. The joy of enlightenment for the author is to be utterly content that all the meanings she finds in life and the purposes she gives are like ripples in the sand that will be reformed with every wave, allowing a new creative and refreshing response to life. ...read more.