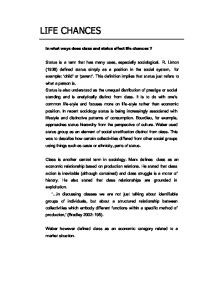 LIFE CHANCES In what ways does class and status affect life chances? Status is a term that has many uses, especially sociological. R. Linton (1936) defined status simply as a position in the social system, for example: 'child' or 'parent'. This definition implies that status just refers to what a person is. Status is also understood as the unequal distribution of prestige or social standing and is analytically distinct from class. It is to do with one's common life-style and focuses more on life-style rather than economic position. In recent sociology status is being increasingly associated with lifestyle and distinctive patterns of consumption. Bourdieu, for example, approaches status hierarchy from the perspective of culture. Weber used status group as an element of social stratification distinct from class. This was to describe how certain collectivities differed from other social groups using things such as caste or ethnicity, parts of status. Class is another central term in sociology. Marx defines class as an economic relationship based on production relations. ...read more.

It has been pointed out that life-chances include the chance to survive; this is obviously associated in some way with the economic stratification of one's country. Occupation is seen as the major source of wealth and incomes for the majority of the population. It is also seen as being synonymous with class. A man's occupation generally deter mines the amount of economic return he will have. Previously it has been stated that education is closely related to income and economics. Education is also closely linked with occupation; therefore many differences have been found in the lifetime earnings of people with none, little, some and great education. Individuals with no education have lifetime earning s of approximately $58,000, whereas college graduates have life earnings of $268,000. There are also big differences when it comes to the level of education, for example, compared to the earnings of college graduates, high school graduates have a lifetime earning of only $165,000. Therefore, if a child can stay in education long enough, he increases the life chances for himself and his family. ...read more.