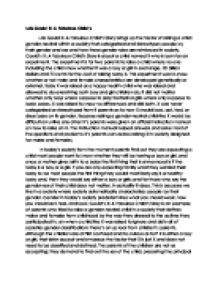 Lois Gould X: A Fabulous Childs Story brings up the factor of raising a child gender-neutral within a society that categorized and stereotypes people by their gender and sex and how these gender roles are reinforced in society.

Lois Gould X: A Fabulous Child's Lois Gould X: A Fabulous Child's Story brings up the factor of raising a child gender-neutral within a society that categorized and stereotypes people by their gender and sex and how these gender roles are reinforced in society. Gould's X: A Fabulous Child's Story is about a child named X who is born for an experiment. The experiment is for two parents to raise a child where no one including the child knew whether it was a boy or girl in exchange, 23 billion dollars and 72 cents for the cost of raising baby X. This experiment was to show whether or not male and female characteristics are developed genetically or external. Baby X was raised as a happy health child who was raised and allowed to do everything both boy and girl children do, it did not ...read more.

If you ask any expecting family what they wanted their baby to be most people the first thing they would most likely say is a healthy baby and, then they would say either a boy or girls; and for those who say the gender-sex of their child does not matter, in actuality it does. This is because we live in a society where society automatically characterizes people by their gender. Gender in today's society predetermines what you should wear, how you should act, feel, and look. Gould's X: A Fabulous Child's Story is an example of parents who tried to raise a gender-neutral child in a society that defines males and females from childhood by the way they dressed to the actives they participated in, an when a child like X was raised to ignore and defy all of societies gender classifications there's an up roar from children's parents. ...read more.

I also believe the school system does reinforce gender roles as to what society feels is acceptable, although there is a shift in society on the roles of women and men and what they can do. Today women are portrayed as heroes who hold the same positions as men and are, caring mothers, who take care of their families; because of this they line of what males and females are only supposed to do is crossed and is becoming acceptable. Gould's X: A Fabulous Child also proved that children are better accepting to change and differences from people, it is a child's parents that changes the child's perceptions of differences and what is acceptable. To live in a gender-neutral society would be ideal, but I feel society would just find another way to classify and define people. ...read more.