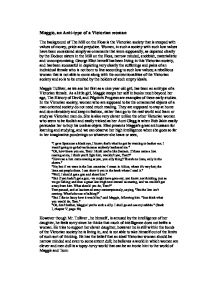 Maggie, an Anti-type of a Victorian woman - The Mill on the Floss

Maggie, an Anti-type of a Victorian woman The background of The Mill on the Floss is the Victorian society that is steeped with values of money, pride and prejudice. Women, in such a society with such low values have been considered simply as ornaments that were supposedly, as depicted clearly by the Dodson sisters in the Mill on the Floss, narrow minded, snobbish, materialistic and uncompromising. George Eliot herself has been living in this Victorian society, and has been successful in depicting very clearly the sufferings and pains of an individual female who is not born to live according to such low values; a rebellious woman that is not able to come along with the conventionalities of the Victorian society and so is to be crushed by the holders of such empty ideals. Maggie Tulliver, as we see her first as a nine year old girl, has been an antitype of a Victorian female. As a little girl, Maggie steeps her self in books much beyond her age, The History of Devil, and Pilgrim's Progress are examples of these early studies. In the Victorian society, women who are supposed to be the ornamental objects of a man-oriented society do not need much reading. They are supposed to stay at home and do embroidery and keep in fashion, rather than go to the real world and learn or study as Victorian men do. She is also very clever unlike the other Victorian women who seem to be foolish and easily tricked as her Aunt Glegg is when Bob Jakin easily persuades her to buy his useless objets. ...read more.

As a child she appreciates very unconventional books and during her talks with Mr. Riley we can see her great interest in magicians and witches or in brief any weird and unconventional character in the books. She also enjoys reading Pilgrim's Progress, because "there is a great deal about devil in that". (Book I, chapter III, page 14). Her interest with Devil depicts her rebelliousness just like Satan and she is like devil outcasted by her society. She is both unconventional in her great deal of studies that is not expected of an ideal female Victorian and also in the choice of her books. Her unconventionality can also be observed when Maggie refuses to do the embroidery like the other girls of her age, or when she does not let her mother to curl her hair, and is moving all the time with her untidy black hair around her. Unlike the other her female contemporaries she is not looking sentimental and she is rather a tomboy. Maggie's rebelliousness is best depicted when she cuts her hair down as a little girl by herself when criticized by her aunts for her untidy hair at the family party. She is a rebellion as "she didn't want her hair to look pretty" but "she only wanted people to think her a clever little girl" (Book I, chapter VII, page 57) . In other words her values do not match those of her contemporary female Victorians; her standard is not beauty but cleverness and intelligence. ...read more.

When the Tulliver family looses the Dorlcore mill after Mr. Tulliver's death, Maggie decides to keep on herself and rather than joining her aunt Pullet for a happy and provided life, she goes to another village to teach and earn her own bread. The Victorian women, as the Dodson sisters present, have been also very prejudiced. They have great care for the names. As we see the Dodsons are all the time boasting with their name and their family prestige. They are so sorry of their sister's marriage with Mr. Tulliver, who they consider to be much below them. They always have greater respect for those of a richer and more prestigious family. As we see near the end of the novel after Maggie goes back to st. Ogg's, when Stephen writes a letter, explains all that has gone among them and accepts the responsibility, people still take Maggie as guilty, since Stephen is from a rich and well known family. However; Maggie is a humble character, who judges every body simply for the sake of themselves. Even when she starts to get impressed by Stephen there is no sign that this is due to his family or social status. She is not prejudiced and never is fond of names. The Mill on The Floss shows George Eliot's strict criticism on the Victorians and their male oriented society in which many women similar to Maggie are to suffer. However, it should be noted that the object of her criticism has not been solely the Victorian masculines, but mostly the Victorian women who have been behaving in accordance with those ideals and are even judging the others by prejudice and financial position. ...read more.