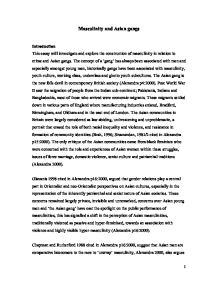 Masculinity and Asian gangs Introduction This essay will investigate and explore the construction of masculinity in relation to crime and Asian gangs. The concept of a 'gang' has always been associated with men and especially amongst young men, historically gangs have been associated with masculinity, youth culture, working class, underclass and ghetto youth subcultures. The Asian gang is the new folk-devil in contemporary British society (Alexandra p4:2000). Post World War II saw the migration of people from the Indian sub-continent; Pakistanis, Indians and Bangladeshis, most of those who arrived were economic migrants. These migrants settled down in various parts of England where manufacturing industries existed, Bradford, Birmingham, and Oldham and in the east end of London. The Asian communities in Britain were largely considered as law abiding, unthreatening and unproblematic, a portrait that erased the role of both racial inequality and violence, and resistance in formation of community identities (Brah, 1996; Sivanandan, 1981/2 cited in Alexandra p15:2000). The only critique of the Asian communities came from black feminists who were concerned with the role and experiences of Asian women within these struggles, issues of force marriage, domestic violence, sexist culture and patriarchal traditions (Alexandra 2000). Glavanis 1998 cited in Alexandra p16:2000, argued that gender relations play a central part in Orientalist and neo-Orientalist perspectives on Asian cultures, especially in the representation of the inherently patriarchal and sexist nature of Asian societies. These concerns remained largely private, invisible and unremarked, concerns over Asian young men and 'the Asian gang' have cast the spotlight on the public performance of masculinities, this has signalled a shift in the perception of Asian masculinities, traditionally visioned as passive and hyper-feminised, towards an association with violence and highly visible hyper-masculinity (Alexandra p16:2000). Chapman and Rutherford 1988 cited in Alexandra p16:2000, suggest that Asian men are comparative latecomers to the race to 'unwrap' masculinity, Alexandra 2000, also argues that the field of masculinity studies has always been concerned with the problematisation of masculine identities and that Asian men are simply the latest inheritors of a tradition that almost instinctually positions them as a 'problem'. ...read more.

(c) Cathexis, sexual desire and emotional attachments shape gender orders. In feminist analyses of sexuality the strong connection of heterosexuality and masculinity defines a man's position of social dominance (Connell p36:2001). The argument presented by Connell is that gender is a way of structuring social practise in general not a special type of practise, he also adds that gender 'intersects' interacts with race and class. White men's masculinities are constructed not only in relation to white women but also in relation to black men (Connell p37:2001). Paul Hoch's study cited in Connell p37:2001, shows that racial imagery in Western discourses of masculinity indicate that White fears of black men's violence have a long history of colonial and post-colonial situations. Black men's fears of White men's terrorism, founded in the history of colonialism, have a continuing basis in White men's control of police, courts and prisons in metropolitan countries. The interesting findings of this research is that masculinity is a social construction but also a product of fear and insecurity. The historical construction of masculinity can be understood as a product of social dominance by men as well as a fear of not having power or control over its subjects. The concept of hegemony was derived from Antonio Gramsci's analysis of class relation and refers to the cultural dynamic by which a group claims and sustains a leading position in social life (Connell p38:2001). Connell defines hegemony masculinity as the configuration of gender practises which embodies the currently accepted answer to the problem of legitimacy of patriarchy, which guarantees the dominant position of men and the subordination of women. Hegemony masculinity is historically a mobile relation its key elements portray the picture of masculinity (Connell p39:2001). One typical example that I found whilst doing my research into the topic of masculinity is that hegemony exists to oppose subordinated groups, woman are typical subjects of domination of hegemonic culture but homosexual groups are the hated subordinates. ...read more.

Fights over territory demonstrate the expressive nature of the masculinity that they have adopted, fighting for identity and survival. '' we're standing up for ourselves, not giving them the chance'- a determination which proves particularly ironic given the groups more usually perceived role as perpetrators and aggressors. Implicit in this tension is the playing out a wider ideological construction of Asian masculinity as weak and feminised, and their more recent reinvention, particularly through the invocation of 'the Gang', a radicalised hyper-masculinity (Alexandra p105:2000). In conclusion, the idea of men being masculine and women being feminine is a statement that has no foundation, just like gender is social constructed, masculinity is socially and historically constructed, It is a culture rather then a nature. The concept of masculinity and associations attached to it is a problem of power struggle and domination. The expression of masculinity amongst black and Asian groups is 'doing masculinity' which is expressed through violence and crime. Asian gang and black gang violence of inner-city streets is an example of marginalised masculinity exercising its power struggle with hegemonic white masculinity. The idea of men being 'real men' is an illusion and a construction of culture. Class and ethnicity in contemporary British society show a reinvention of masculinity at its violent form. Women are victims of masculinity culture as well as homosexual men; masculinity sees femininity as an inferior nature and challenges the notion of femininity as subordinate existence. In Asian gangs the expression of masculinity is though violence because that's the only channel available to express one's frustration and not being able to control and dominate, leads to a power struggle outside of the home and inside. Violence and crime in marginalised masculinity is the only form of expression, public performance of criminality and hyper-masculinity is demonstrated to reinforce the domination of masculinity and shows a power struggle between hegemonic institutional masculinity. ...read more.