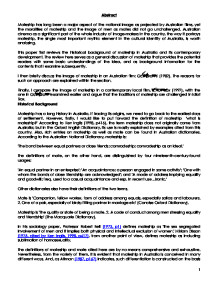 Mateship has long been a major aspect of the national image as projected by Australian films, yet the moralities of mateship and the image of men as mates did not go unchallenged.

Abstract Mateship has long been a major aspect of the national image as projected by Australian films, yet the moralities of mateship and the image of men as mates did not go unchallenged. Australian cinema as a significant part of the whole industry of image-makers in the country, the way it portrays mateship, the single most important mythic element in the cultural identity of Australia, is worth analysing. This paper first reviews the historical background of mateship in Australia and its contemporary development. The review here serves as a general discussion of mateship that provides the potential readers with some basic understandings of the idea, and as background information for the contents that I examine subsequently. I then briefly discuss the image of mateship in an Australian film: Gallipolis (1982). The reasons for such an approach are explained within the section. Finally, I compare the image of mateship in a contemporary local film, Idiot Box (1997), with the one in Gallipoli examined earlier and argue that the traditions of mateship are challenged in Idiot Box. Historical Background Mateship has a long history in Australia. If tracing its origins, we need to go back to the earliest days of settlement. However, firstly, I would like to put forward the definition of mateship 'what is mateship?' According to Ken Inglis (1998, p416), the term mateship does not originally come from Australia; but in the Oxford English Dictionary, its use is mostly explained by examples cited from this country. Also, rich entries on mateship as well as mate can be found in Australian dictionaries. According to the Australian National Dictionary, mateship is: 'The bond between equal partners or close friends; comradeship; comradeship as an ideal.' The definitions of mate, on the other hand, are distinguished by four nineteenth-century-found usages: 'An equal partner in an enterprise'; 'An acquaintance; a person engaged in some activity'; 'One with whom the bonds of close friendship are acknowledged'; and 'A mode of address implying equality and goodwill; freq. ...read more.

From the respect and importance placed on the events of Gallipoli and the Anzac history in general, it is evident how significant the Great War experience means to Australians. According to Edgar (1997, p108), the First World War brought mateship into a new phase. The fraternity of men expends to such an extent that a man's mate can be a complete stranger as long as they are directed for a common goal. And, such a view led to the sort of mateship that typifies the men at local pubs or the team members of sport clubs. On the other hand, however, Culling (1992, p13) points out that the cruel reality of warfare resulted in the Australians' rethinking of war itself and the true meaning of being a battler. Consequently, although mateship was still valued, its sacrificial element was of less importance when it came to the Second World War. There are many Australian films about Gallipoli and the Anzac experience, but Gallopoli (1982) is definitely an important one. Such phases of development indicate how Australian mateship evolved from its original concept as a necessary bonding of men for survival and working relationship to the level of mythology and as a basis for national ideologies. And, undoubtedly, by examining the influential idea from different points of view, its significance and implications would become clearer and not be one-sided. Contemporary Development Mateship in the past was formed out of the necessity for companionship, working partners or survival. As Townsend (1994, p212) points out, mateship is increasingly replaced by friendship and other family bonds in the modern world. And mateship, nowadays, is probably reserved for male groups where traditional values of male dependency are crucial, for example, the arm force and the football clubs. However, as Edgar (1997, p117) points out, the advent of feminism in Australia probably has the greatest influence on the ethos of Australian mateship. ...read more.

The two blokes, Ken and Mick, one grew up in a single family with his mom; another shares an apartment with his hard working brother. Both of them are unable to get understandings from their families. The lack of consideration and trust from the families and their own frustration (being unemployed and looked down) force them to form their isolated mateship. For both Ken and Mick, there seems to have no escape from their mates and their own world. In addition, the suppression of emotions, one of the most influential traditions of mateship, worsens the problem. Although Kev and Mick are best mates, the almost tacit agreement that mateship never involves intimacy makes them emotionally apart. They never talk anything personal, even though they spend most of their time together. Townsend (1994, p220) puts forwards that one of the significant drawback of mateship is the lack of intimacy and personal communication. Kev, obviously, is the one who suffers more from the suppression of emotions. Yet, the exclusion of females in mateship is another factor that traps him in his own place. To Ken, his mate is always more important to his girlfriend. Except for sex, there seems to be nothing between Ken and his girlfriend. Comparing with Kev, Mick is more stable, sensitive and romantic, but except that, he does not have many things better. In fact, the relationship with his girlfriend, Lani, may change his life, but his loyalties to Kev drag him back to their mateship. In the beginning, Mick does not agree with Kev's idea of bank robbery. But, the conformity of mateship makes him follow Kev's decision anyway. In conclusion, Idiot Box challenges the traditional values of Australian mateship by examining the institution in the context of the modern world. By comparing the totally different representations of mateship in Gallipoli and Idiot Box, it is obvious that perhaps the tradition of mateship continues to exist in Australian society, however, its significance probably is much weaker than in former times. 1 ...read more.