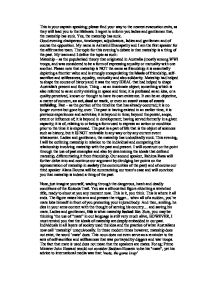 This is your captain speaking; please find your way to the nearest evacuation exits, as they will lead you to the lifeboats. I regret to inform you ladies and gentlemen that, the mateship has sunk. Yes, the mateship has sunk. Good evening chairperson, timekeeper, adjudicators, ladies and gentlemen and of course the opposition. My name is Ashwini Dhanapathy and I am the first speaker for the affirmative team. The topic for this evening's debate is that mateship is a thing of the past. My team and I define the topic as such: Mateship - as the popularised theory that originated in Australia (mostly among WWI troops, and was considered to be a form of expressing equality or mutuality with one another. Please note that mateship is NOT the same as friendship; it is essentially depicting a frontier value and is strongly encapsulating the ideals of friendship, self-sacrifice and selflessness, equality, mutuality and also solidarity. Mateship had helped to shape the course of history and it was the very IDEAL that had helped to shape Australia's present and future. Thing - as an inanimate object; something which is also referred to as an entity existing in space and time; it is professed as an idea, or a quality perceived, known or thought to have its own existence. It can be an objective, a matter of concern, an act, deed or work, or even an event/ cause of events unfolding. ...read more.

Individuals in all layers of society used the idea and the practice of what Australians now call 'mateship' unequivocally. In these modern times however, mateship does not exist, the word 'mate' does. This noun does not even serve as a reminder to the acts of self-sacrifice and selflessness that was portrayed by diggers and war troops. The fact that mate is used does not mean that the speakers are mates. For eg: Prime Minister John Howard would not consider Saddam Hussein to be his "mate", yet his advice to international media was that: 'mate, the game is up' Therefore, the word mate in modern times does not uphold what it used to represent - ethics such as equality. As Sergeant Graham Burridge said 'It would take an awful lot of courage to jump on the back of a crocodile, but I suppose that's what you'd do for a mate' which is true - mateship is all about self-sacrifice for another being; the act of giving, the act of utmost selflessness. The notion of ones mates being important was long entrenched in the Australian culture. Not today it isn't. Nowdays, it's all about 'me, me, me, me, me, me'. Henry Lawson once said: True mateship looks for no limelight. They say that self-preservation is the strongest instinct of mankind; it may come with the last gasp, but I think the preservation of the life or liberty of a mate-man or woman-is the first and strongest. ...read more.

Mateship, as an ideal was then lost in the exodus from the bush to the city, and thus, the change in people. Banjo Paterson depicts this in his poem 'Clancy of the Overflow'. 'As they shoulder one another in their rush and nervous haste, With their eager eyes and greedy, and their stunted forms and weedy, For townsfolk have no time to grow, they have no time to waste' Another good reflection on how times have changed is the new ideal that 'Greed is good', which was well demonstrated in the movie Wall Street. Greed, for lack of a better word, is good. Greed is right; greed works. Greed clarifies, cuts through, and captures the essence of the evolutionary spirit. Greed, in all of its forms, greed for life, for money, for love, knowledge - has marked the upward surge of mankind and greed. Come on, get real, you can't deny that times have changed and with it, the attitudes of individuals. The fact that mateship is a thing of the past may be for better or worse, but that is not what we're debating here. Ladies and gentlemen my team and I know that the very fact that examples of mateship are so revered attests to its rarity. I have stated mateship in relation to individuals and compared the past with the present. My speech discusses that self-interest is a thing of the present and mateship, well; mateship is a thing of the past. Ladies and gentlemen, the mateship has sunk. ...read more.