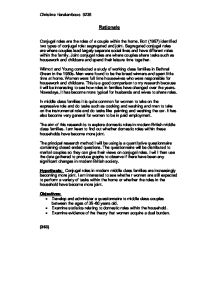 Methodology For my study, I am investigating roles within middle class homes and whether roles have become more joint in recent years. I also want to know their opinion on the household chores do at home.

Rationale Conjugal roles are the roles of a couple within the home. Bott (1957) identified two types of conjugal role: segregated and joint. Segregated conjugal roles are where couples lead largely separate social lives and have different roles within the family. Joint conjugal roles are where couples share tasks such as housework and childcare and spend their leisure time together. Wilmott and Young conducted a study of working class families in Bethnal Green in the 1950s. Men were found to be the breadwinners and spent little time at home. Women were full time housewives who were responsible for housework and childcare. This is a good comparison to my research because it will be interesting to see how roles in families have changed over the years. Nowadays, it has become more typical for husbands and wives to share roles. In middle class families it is quite common for women to take on the expressive role and do tasks such as cooking and washing and men to take on the instrumental role and do tasks like painting and washing the car. It has also become very general for women to be in paid employment. The aim of this research is to explore domestic roles in modern British middle class families. I am keen to find out whether domestic roles within these households have become more joint. ...read more.

When I was posing the questions, the couples completed them separately but some were heard to say comments like 'I'll do that' even though they weren't with a partner. It was important to have an equal number of respondents for each sex as I didn't want to have biased data. Question 2: What is your age group? The majority of my respondents (53%) were between the ages of 35-44. The generational differences between the groups showed that the 35-44 age group tended to have men do more of the housework than men in the age groups 45-54 and 55-60. Because they are of an older generation, they tend to have more traditional views of who does the housework in the home. Question 3: What is your profession? Estate Agent 1 Retail Store Manager 1 Chemist 1 Housewife 3 Bookkeeper 1 Admin Assistant 1 Analyst 1 Teacher 2 Salesman 1 Nurse 2 Printer 2 Finance Officer 1 Account Director 1 Secretary 2 Cashier 2 Banker 2 Accountant 1 Nursery Nurse 1 Local Government Finance 1 University Lecturer 1 Fire Station Officer 1 Solicitor 1 My context concentrates on people who have only studied middle class families and my hypothesis was that conjugal roles in modern middle class families are increasingly becoming more joint. As a result I needed to know that all my respondents were of middle class and / or either partner was of a middle class profession. ...read more.

This evidence is shown in the pie chart. Question 11: Do you and your partner spend your free time together? A high number of people said they did spend their free time together which was wholly unexpected. This differs from years ago when men and women would spend the majority of their free time apart. Question 12: Do you think that you spend more time than your partner doing household tasks? This was a key question to ask because I wasn't sure of what kind of responses I would receive. As shown there isn't a clear response. Men tended to think they spent the same time on tasks as women even though it is probably not the same amount as women carried out. This study challenges my hypothesis because it said that conjugal roles are becoming more joint and this evidence has shown that this is not strictly true. Question 13: As a child, who did the majority of the household chores? This was important to ask because how you have been socialised at home when you were younger plays a large part in the family life you have when you are older. It also shows the trends that have changed since a few decades ago. 23% of households now say both partners share household tasks compared to only 6% several decades ago. Although the trends are only slightly changing, it is shown to be increasing which is what i hypothesised. ?? ?? ?? ?? Christine Haralambous 9238 ...read more.