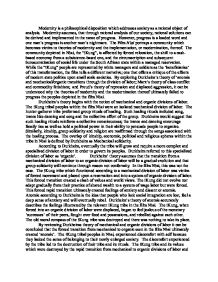 Modernity is a philosophical disposition which addresses society as a rational object of analysis. Modernity assumes, that through rational analysis of our society, rational solutions can be derived and implemented in the name of progress. However, progress is a loaded word and one man's progress is another man's nightmare. The Film N!ai portrays a community which becomes victim to theories of modernity and the implementation, or modernization, thereof. The community depicted in N!ai, the "!Kung", is affected by forced relocation, the shift to a cash-based economy from a subsistence-based one, and the circumscription and subsequent bureaucratization of social life under the South African state within a managed reservation. While the "!Kung" people are represented by white managers and soldiers as the 'beneficiaries' of this transformation, the film tells a different narrative; one that offers a critique of the effects of modern state politics upon small scale societies. By exploring Durkheim's theory of 'anomie and mechanical/organic transitions through the division of labor; Marx's theory of class conflict and commodity fetishism; and Freud's theory of repression and displaced aggression, it can be understood why the theories of modernity and the modernization thereof ultimately failed to progress the peoples depicted in the film N!ai. ...read more.

Marx asserted that cultural difference is produced through social practice. Marx feared that the difference between values embedded in culture are not insurmountable and will diminish into global culture that will supersede all those differences. Marx concluded that culture is an essentialized form of thinking used to separate people. Culture therefore, masks over the fact that certain individuals dominate over others and serves as the creator of a dominant ideology. The !Kung tribe existed within a classes society; food was gathered collectively and distributed evenly throughout the peoples. There was no concept of material things nor their worth. Eventually, white managers and soldiers placed the !Kung peoples upon a reservation and inserted them at the bottom of a class based economy. Hunting was banned, and the !Kung were forced to eat mealy meal. The values which once defined the !Kung culture were no longer were effective means survival and were erased. The !Kung were placed at the bottom of a capitalist society, the dominant ideology of modernity, and this lead to the abolishment of the !Kung culture and created asymmetrical encounters between the dominant culture and the individual. As the class economy took shape among the !Kung, commodity fetishism and further conflict was created. ...read more.

While the "!Kung" people are represented by white managers and soldiers as the 'beneficiaries' of this transformation, the film tells a different narrative; one that offers a critique of the effects of modern state politics upon small scale societies. The theories of Durkheim, Marx and Freud when reviewed lend themselves to the understanding of why this might be true. Durkheim asserts that the rapid transition of labor from a mechanical to an organic based society will result in feelings of 'anomie'. Marx argues that certain individuals dominate others. In N!ai, the dominant South Africans or 'white man' asserted their dominance over the !Kung tribe and placed them within a class based society. The class based economy effectively created commodity fetishism within the !Kung and the consequently created conflict. Last, Freud explained that the strict order demanded by the societal structure which the !Kung were placed within created feelings of repression. The repression of feelings of anxiety and confusion, or as described by Durkheim 'anomie', eventually led to displaced aggression of the !Kung peoples unto themselves. By examining the film N!ai according to the theories of Durkheim, Marx and Freud, it is clearly understood that theories of modernity and the modernization thereof, are sometimes unable to progress the peoples which it intends. ...read more.