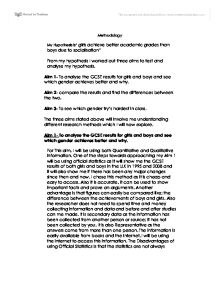 My Hypothesis is girls achieve better academic grades than boys due to socialisation From my hypothesis I worked out three aims to test and analyse my hypothesis.

I will use books as it will show me the changes there has been between both genders educational achievements throughout time and what influenced girls or boys to do better. This method is also reliable which means that someone else can easily repeat the method for your project. The disadvantage of using this method is that it can be extremely time consuming. Also it depends of the participant to tell the truth or not. it is easy to misread the articles because it's somebody else's opinion . Also it might not represent everybody's view. Aim 2- compare the results and find the differences between the two. My first step towards achieving my second aim I will again need to use secondary data, I will need to find both GCSE results for genders which I will do by using official statistics. This will be an analysis of statistics as I will analyse both results and compare them in order to see who achieves better. ...read more.

The researcher cannot take notes and must rely on memory and the opportunity to write them down secretly without anyone knowing. Also another disadvantage is that the researcher cannot ask questions or combine observation with other methods such as interviews. Although pretending to be an insider rather than an outsider reduces the risk of the Hawthorne effect, the addition of a new member (the researcher) can still change the group's behaviour, thus reducing validity. Covert participant also raises serious ethical issues for researchers. These often conflict with the practical advantage it brings of observing natural behaviour. It is immoral to deceive people. Getting information by pretending to be their friend or 'in the same boat'. Covert observers may have to lie about their reasons for leaving the group and the end of their research. They may have to participate in immoral or illegal activities as part of their 'cover' role. Similarly, as witnesses to such activities, they may have a moral or legal duty to intervene or to report them to the police. I will use these methods for these Aims, because they are more reliable and together they will bring validity and Reliability to my project. ...read more.