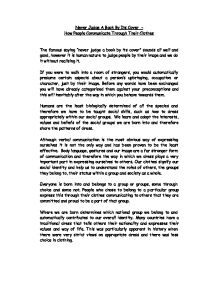 Never Judge A Book By Its Cover - How People Communicate Through Their Clothes.

Never Judge A Book By Its Cover - How People Communicate Through Their Clothes The famous saying "never judge a book by its cover" sounds all well and good, however it is human nature to judge people by their image and we do it without realising it. If you were to walk into a room of strangers, you would automatically presume certain aspects about a person's upbringing, occupation or character, just by their image. Before any words have been exchanged you will have already categorised them against your preconceptions and this will inevitably alter the way in which you behave towards them. Humans are the least biologically determined of all the species and therefore we have to be taught social skills, such as how to dress appropriately within our social groups. We learn and adopt the interests, values and beliefs of the social groups we are born into and therefore share the patterns of dress. Although verbal communication is the most obvious way of expressing ourselves it is not the only way and has been proven to be the least effective. ...read more.

This has bought diversity and variety in clothing and it is now acceptable not to dress traditionally. Due to this multi-cultural diversity in Britain there are many religious groups originating from all over the world. Many of these groups separate themselves from others because of their specific beliefs and values. They share a particular style of dress that shows they belong to a particular group, such as the Sikhs who wear a turban and the Jews who wear a Skullcap. Within these religious groups individuals wear particular clothes to express their roles and status, for example a Christian Reverent will wear a dog collar that distinguishes him/her from other members of the group because of the special role they perform. This will determine how other will behave and respond to them. There are also community groups or family groups, which are not necessarily associated with a particular religion but share interests and values. These are not as easily identified by their dress, although some communities do share the dress patterns. ...read more.

As well as using dress to communicate our true identity, we can also use our image to give a false impression. Many people will choose to wear a smart formal suit to a court hearing. This will give their judge and jury the impression that they are presentable and therefore more reliable, law abiding and of good character, even if this is not the case. This form of false communication is also used regularly for entertainment such as in theatre, film and TV. Dress as a form of communication is vital for the smooth running of a society. However, in order for this form of communication to be effective, the significance of the dress must to be taught and understood. For example, many people in Britain would not understand the significance of African tribal dress or body adornment, which is used to signify their status, age and sex. In conclusion, my research shows that the way in which we dress is an integral form of communication within a society. It helps people to understand our social identity and to understand the roles of others, the groups they belong to, their status within a group and society as a whole. ...read more.