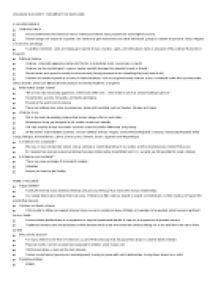 Notes on Violence in Society

﻿VIOLENCE IN SOCIETY: THE IMPACT ON OUR LIVES A VIOLENT WORLD 1. Violent by nature 1. Since ancient times the world has been a violent place where many people have had to fight to survive. 2. Human beings are unique as a species, use violence to gain dominance over other individuals, groups or nations for personal, racial, religious or economic advantage. 3. In addition, television, radio and newspaper reports of wars, murders, rapes, and child abuse make us all aware of the violence that exists in the world. 1. Defining Violence 1. Violence : physically aggressive behaviors that do, or potentially could, cause injury or death. 2. Violence can be psychological: a person maybe mentally damaged by repeated cruelty or threats 3. Sexual abuse and rape also usually involve coercion (forcing someone to do something they don?t want to do) 4. Children and adults exposed to all sorts of violent situations, such as long-term family violence or war, sometimes suffer from post-traumatic stress disorder, which can affect both their physical and mental health for a long time. 1. What makes people violent? 1. ?We are by nature basically aggressive, violent and selfish and? there exists in all of us a beast waiting to get out.? 2. Social factors: poverty, inequality, and family upbringing 3. Poverty is the worst kind of violence. 4. There are relatively less crime in prosperous, democratic countries such as Sweden, Norway and Japan. 1. Violence in war 1. War is the most devastating violence that human beings inflict on each other. ...read more.

Benefits: 2. 1.Employers exploit child workers and use their ready availability to force down adult wages. 3. 2. Governments benefit from increased exports and economic growth. 4. 3. Consumers at home and abroad enjoy lower prices of products. VIOLENT CRIME Murder is regarded as the most serious of crimes. It is also the easiest violent crime on which to get reliable statistics. 1. Perpetrators of violent crime 1. The majority of violent criminals are young men who are likely to come from a background of poverty and live in inner cities. 2. Women are also involved in crimes like shoplifting, public drunkenness, drugs and prostitution. 1. Victims of violent crime 1. The young, low-income, inner city men are also the most common victims of theft, assault and other forms of violence. 1. Turning to crime 1. Reasons: 2. 1. An early age boy may join gangs in which crime is a way of life. 3. 2. the rapidly changing position of men in society. 1. Violence and drugs 1. Illegal drugs are blamed for much of the increase in violent crime throughout the world. 1. Guns and gun control 1. In the U.S. more family members are killed by one of their own family?s guns ? by accident, suicide or an impulsive family fight ? than are killed or even threatened by a criminal?s gun. 1. Organized crime 1. Is a group enterprise that resembles a normal business but engages in illegal activities. It includes prostitution smuggling (drugs, people, goods), illegal gambling, large-scale theft, blackmail and intimidation. ...read more.

20. Ethnic group ? a group of people who share a common culture, tradition and sometimes language. 21. Fascist ? someone who obeys one powerful leader, opposes democracy, and believes that his or her country or ethnic group is better than all others. 22. Fundamentalism ? the practice of following the traditional rules of a religion 23. Genocide ? the deliberate killing of an entire ethnic group or nation 24. Globalization ? growing social and economic interdependence between different people and countries in the world. 25. Heterosexual ? someone who is sexually attracted to people of the opposite sex. 26. Homosexual ? someone who is sexually attracted to people of the same sex. 27. Hooliganism ? noisy, rough, aggressive behavior 28. Hutterite - member of the Anabaptist sect who came from Eastern Europe during the 1800s to escape religious persecution 29. International Labor Organization (ILO) ? a UN organization that investigates working conditions around the world and proposes legislation to protect workers from abuse and hazards in the workplace. 30. Pedophile ? adult who is sexually attracted to children 31. Perpetrator ? someone who does something wrong or criminal 32. Post ? traumatic stress disorder ? condition of mental stress, anxiety and sometimes physical illness which may follow injury or psychological shock 33. Refugee ? someone who has been forced to leave his or her country for political reasons or escape war. 34. Therapy ? treatment of physical or mental disorders without using drugs or surgery. 35. Zero ? tolerance policy ? approach to crime prevention that emphasizes maintaining order by targeting small-scale crime and minor disturbances in order to prevent more major crime problems 36. ...read more.