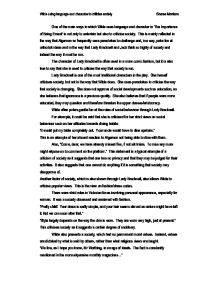 Oscar Wilde's criticism of society in The Importance of Being Ernest

One of the main ways in which Wilde uses language and character in 'The Importance of Being Ernest' is not only to entertain but also to criticise society. This is mainly reflected in the way that Algernon so frequently uses paradoxes to challenge and, in a way, poke fun at orthodox ideas and in the way that Lady Bracknell and Jack think so highly of society and indeed the way it must be run. The character of Lady Bracknell is often used in a more comic fashion, but it is also true to say that she is used to criticise the way that society is run. Lady Bracknell is one of the most traditional characters in the play. She herself criticises society, but not in the way that Wilde does. She uses paradoxes to criticise the way that society is changing. She does not approve of social developments such as education, as she believes that ignorance is a precious quality. She also believes that if people were more educated, they may question and therefore threaten the upper classes/aristocracy. ...read more.

But we can soon alter that." "Style largely depends on the way the chin is worn. They are worn very high, just at present." This criticises society as it suggests a certain degree of snobbery. Wilde also presents a society, which had no permanent moral values. Instead, values are dictated by what is said by others, rather than what religious views are taught. "We live, as I hope you know, Mr Worthing, in an age of ideals. The fact is constantly mentioned in the more expensive monthly magazines..." Marriage is so often criticised by Wilde, as it is a key part of the play. It is presented as something which families take part in just to improve/sustain their social status. Lady Bracknell will not even let her daughter choose her own husband. This is because it is supposed to be something that the parents choose. "An engagement should come on a young girl as a surprise, pleasant or unpleasant, as the case may be. It is hardly a matter that she could be allowed to arrange for herself." ...read more.

This is also very patronising. The way that Wilde uses the character of Algernon to criticise society is in a totally different way. The character's language is full of paradoxes and puns, which challenge and criticise society in themselves. His outlook on life is totally opposite to that of a 'typical' Victorian, allowing Wilde to reject the rules of normal society and create new Victorian concepts through Algernon. "I hate people who are not serious about meals. It is so shallow of them." Not only is this comic and typical of Algernon's ideas, it creates the idea that society is wrong in what is said to be important and pleasure is actually the most important thing in life. Algernon also hates the idea of "washing one's clean linen in public." This is also totally controversial of typical ideas as even Lady Bracknell suggests that everything one does will be public knowledge. Although on the surface it can appear that Wilde uses character and language solely to develop comedy in the play, it can also be said that a more important idea of society's criticisms is developed through the characters and language. Wilde using language and character to criticise society Sheree Morrison ...read more.