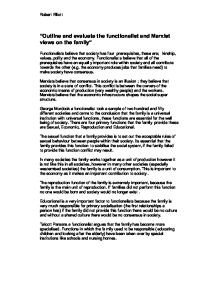 Outline and evaluate the functionalist and Marxist views on the family

"Outline and evaluate the functionalist and Marxist views on the family" Functionalists believe that society has four prerequisites, these are; kinship, values, polity and the economy. Functionalists believe that all of the prerequisites have an equally important role within society and all contribute towards the other (e.g. the economy produces jobs that families need) to make society have consensus. Marxists believe that consensus in society is an illusion; they believe that society is in a state of conflict. This conflict is between the owners of the economic means of production (very wealthy people) and the workers. Marxists believe that the economic infrastructure shapes the social super structure. George Murdock a functionalist took a sample of two hundred and fifty different societies and came to the conclusion that the family is a universal institution with universal functions, these functions are essential for the well being of society. There are four primary functions that the family provide these are Sexual, Economic, Reproduction and Educational. The sexual function that a family provides is to set out the acceptable rules of sexual behaviour between people within their society. ...read more.

have been taken over by special institutions like schools and nursing homes. Talcott Parsons says the family has two basic and irreducible functions; the primary socialisation of children and the stabilisation of adult personalities. Primary socialisation is very important to the socialisation process, Parsons believes that every body must learn values and norms of society. If the family failed to provide this function there would be no consensus in society because people would not know how to interact with each other. Primary socialisation shapes the personality structure of a child, so much so that societies shared norms and values become part of the child. The second irreducible function is the stabilisation of adult personalities. Families help to stabilise adult personalities in two ways, first martial partners provide emotional support to one another. As parents they are able to satisfy the childish side of there personalities e.g. playing with there children. Marxists rejects the view of consensus in society, instead Marxists see the family as one of a number of institutions which maintains the position of the ruling class. ...read more.

Functionalists assume that families perform essential functions for society and members of the family. Married couples are pictured as living in harmony however some critics argue that this does not reflect true realities of family life. Functionalists often ignore the other side of family life e.g. conflicts between parent and child or husband and wife. Functionalists give insufficient attention to dysfunctional families and there affect on society. Parsons view of the family has been said to be sexist because he sees the wife or mother as having the responsibility of providing emotional support and de-stressing her husband. However Talcott Parsons was born in 1902 and this view of women in the household would not have been seen as sexist. Marxists views of the family follow Marxist theory. The family provides support for the workers and helps makes sense of the injustice of the economy. Sociologists generally agree that the economy has some influence on family life, however most sociologists would agree that that the family is not shaped by the needs of the system. ?? ?? ?? ?? Robert Elliott ...read more.