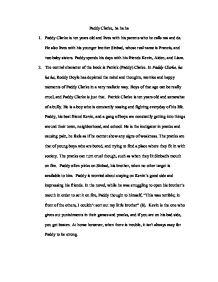 Paddy Clarke, ha ha ha 1. Paddy Clarke is ten years old and lives with his parents who he calls ma and da. He also lives with his younger brother Sinbad, whose real name is Francis, and two baby sisters. Paddy spends his days with his friends Kevin, Aiden, and Liam. 2. The central character of the book is Patrick (Paddy) Clarke. In Paddy Clarke, ha ha ha, Roddy Doyle has depicted the mind and thoughts, worries and happy moments of Paddy Clarke in a very realistic way. Boys of that age can be really cruel, and Paddy Clarke is just that. Patrick Clarke is ten years old and somewhat of a bully. He is a boy who is constantly teasing and fighting everyday of his life. Paddy, his best friend Kevin, and a gang of boys are constantly getting into things around their town, neighborhood, and school. He is the instigator in pranks and causing pain, he feels as if he cannot show any signs of weakness. ...read more.

Paddy was apart of this chaos until he realized that strange things are going on between his parents and they are fighting. Paddy tries to help his parents' marriage that is falling apart and getting worse each day as well as bringing the whole family back together. 4. The major conflict in the story is Paddy's struggle to cope with the separation of his parents. Although the beginning of the novel is filled with pranks and cruelty, his life is not all about pranks. There were consequences for his mischief, brotherly affection and rivalry, as well as a separation between his parents. The growing challenge between his parents and the breaking up of their marriage is apparent as the novel moves on. Paddy's life takes on a more serious approach as his parents continue to constantly argue, as well as his father becoming violent with Paddy's mother. The boys are troubled by the thought of their family falling apart. ...read more.

Paddy also became aware that Charles Leavy does not need any friends, and he fights him. After the fight between him and Charles was over with, Paddy said, "No one had jumped in for me when Charles Leavy had been going to kill me; it took me a while to get used to that, to make it make sense. To make it alright" (186). This passage shows a more mature side to Paddy, as he is figuring out more and more about whom he is and where he belongs in society. However, he still cannot understand why his parents continue to fight and the breakdown of his parent's marriage has a profound effect on Paddy. When the fighting starts, he stays close to his mom, as if almost to protect her, and when his dad hits his mom, he is confused. After this happened Paddy said, "I loved him. He was my da. It didn't make sense. She was my ma" (191). Although Paddy was never able to make complete sense of his parent's relationship, he took it as it was and dealt with it as a very mature young boy. ...read more.