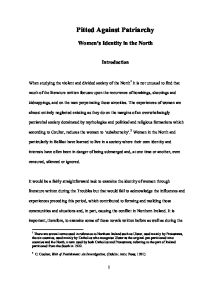 Pitted Against Patriarchy Women's Identity in the North Introduction When studying the violent and divided society of the North1 it is not unusual to find that much of the literature written focuses upon the recurrence of bombings, shootings and kidnappings, and on the men perpetrating those atrocities. The experiences of women are almost entirely neglected existing as they do on the margins of an overwhelmingly patriarchal society dominated by mythologies and political and religious formations which according to Coulter, reduces the women to 'subalterneity'.2 Women in the North and particularly in Belfast have learned to live in a society where their own identity and interests have often been in danger of being submerged and, at one time or another, even censured, silenced or ignored. It would be a fairly straightforward task to examine the identity of women through literature written during the Troubles but that would fail to acknowledge the influences and experiences preceding this period, which contributed to forming and molding those communities and situations and, in part, causing the conflict in Northern Ireland. It is important, therefore, to examine some of those novels written before as well as during the 'Troubles' which highlight the patriarchal structures dominating the lives of Northern Irish women. Even though women from Nationalist and Unionist communities cannot be viewed as homogenous they do share certain oppressive patriarchal structures. They are for the most part at the mercy of their husbands and/or sons, their respective churches, the Unionist movement (the Republican movement for Catholic women) and the British government. It is these patriarchal structures which have dictated that women in the North should adhere to very specific roles- the wife, the mother and the homemaker-ensuring their needs remain a low priority. Until recently the impact of the conflict and patriarchal oppression upon the lives of those women has all but been ignored as was the complexity of their responses to oppression and violence. ...read more.

baker", this self employed woman worker is moving away from the patriarchal family, the British State and Republicanism which have used her identity as a Nationalist woman for their own purposes. These forces see her status and identity as, according to Gayatri Spivak, "commodities in the strictest sense: something of an exchange." 50 As a result of Martha attempting to define herself as a female worker rather than a Nationalist both the State and the I.R.A. destroy her property in their attempt to bring her into line with their own agenda. Following the closure of her shop for her Republican brother's funeral, she is visited by a British Officer who attempts to label her as a dissident, asking whether the closure was "'a gesture of defiance." Martha replies 'Listen you...it's my shop and my business and I'll open and shut as I please and nobody intimidates me.'51 The exchange results in Martha's shop being searched and hugely disrupted, making it extremely difficult to continue business. Her refusal to comply with the State results in the destruction of anything which they see as unproductive to them. Likewise, the I.R.A. also seeks to punish her for her resistance to their demand of not serving British soldiers. It is no coincidence that the boy is shot against her wall. He, like Martha is seen as a transgressor, daring to step beyond the boundaries of Republican law and order. His punishment is deliberately executed within her workspace serving as a warning. As a nationalist woman, Martha is expected to acquiesce to their demands or else be "taught a lesson", contained and disciplined. Her bakery is torched. How appropriate, therefore, for both patriarchal forces to destroy her business, Martha's vehicle for subverting these forces. In her article, Spivak makes the point that it is quite natural for women to identify with Nationalism, even though it is those Nationalist forces that succeed in oppressing women in their use of them to subvert the forces they themselves are fighting but "they ...read more.