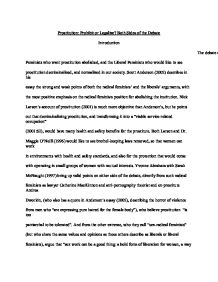 Prostitution: Prohibit or Legalize? Both Sides of the Debate

Prostitution: Prohibit or Legalize? Both Sides of the Debate Introduction The debate over prostitution is one that divides feminists into two groups: the Radical Feminists who want prostitution abolished, and the Liberal Feminists who would like to see prostitution decriminalized, and normalized in our society. Scott Anderson (2002) describes in his essay the strong and weak points of both the radical feminists' and the liberals' arguments, with the most positive emphasis on the radical feminists position for abolishing the institution. Nick Larson's account of prostitution (2001) is much more objective than Anderson's, but he points out that decriminalizing prostitution, and transforming it into a "viable service-related occupation" (2001:62), would have many health and safety benefits for the prostitute. Both Larson and Dr. Maggie O'Neill (1996) would like to see brothel-keeping laws removed, so that women can work in environments with health and safety standards, and also for the protection that would come with operating in small groups of women with mutual interests. Yvonne Abraham with Sarah McNaught (1997) bring up valid points on either side of the debate, directly from such radical feminists as lawyer Catherine MacKinnon and anti-pornography theorist and ex-prostitute Andrea Dworkin, (who also has a quote in Anderson's essay (2002), describing the horror ...read more.

as "a kind of inhuman violence targeted at the female body," the social stigma attached to prostitutes and pimps. The fact that women earn lower wages than men, and that there are fewer employment options available to them is a factor that Davis (1979) approaches. He suggests that if the wages of working girls were raised, there would be less incentive for women to go into prostitution rather than the more socially accepted forms of employment. There would, therefore, be fewer prostitutes on the street, and the ones still there would be in higher demand, and would then be charging more for their services. The larger amounts of money being made by prostitutes would then entice even women who have legitimate occupations into the field of prostitution, and there would be as many prostitutes as there were to begin with. Social conditions that force women into the trade, and seem to undermine their ability to avoid the harms and abuses that accompany this sort of work also fall into this category. Many girls go into prostitution because of prior physical or sexual harassment and brutality, or because of homelessness, substance addiction, or financial emergency. ...read more.

In the Netherlands, where prostitution is decriminalized, police officers and prostitutes are on the same side. Prostitutes speak at police academies, and the communication pays off in safer working conditions (Abraham with McNaught, 1997). Conclusion In conclusion, the radical feminists want to completely get rid of prostitution in any form, because of its sexist, chauvinistic patriarchal nature, and because it is harmful and degrading to women. The liberal feminists want to make life better for the prostitute by allowing them to continue to work in the sex trade, with the law on their side, to protect them and make their working conditions as safe and healthy as any other worker in our society. Anderson (2002) has the fullest, most complete argument, presenting both sides equally, and giving substantial reasons for his siding with the radical feminists to abolish the sex trade, because to normalize it would be to give up sexual autonomy. Abraham with McNaught (1997) also have very convincing arguments for both sides of the debate, quotes directly from extreme radical feminists, and those from the other end of the spectrum as well. Davis (1979) also has good arguments, that are very objective. They are good material to read to begin forming a personal opinion on the debate. ?? ?? ?? ?? ...read more.