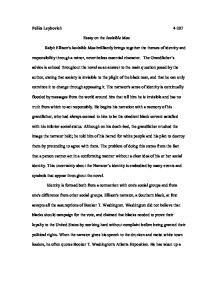 Ralph Ellison's Invisible Man brilliantly brings together the themes of identity and responsibility through a minor, nevertheless essential character. The Grandfather's advice is echoed throughout the novel

Feliks Leybovich 4-207 Essay on the Invisible Man Ralph Ellison's Invisible Man brilliantly brings together the themes of identity and responsibility through a minor, nevertheless essential character. The Grandfather's advice is echoed throughout the novel as an answer to the main question posed by the author, stating that society is invisible to the plight of the black man, and that he can only convince it to change through appeasing it. The narrator's sense of identity is continually flooded by messages from the world around him that tell him he is invisible and has no truth from which to act responsibly. He begins his narration with a memory of his grandfather, who had always seemed to him to be the obedient black servant satisfied with his inferior social status. Although on his death-bed, the grandfather crushed the image the narrator held; he told him of his hatred for white people and his plan to destroy them by pretending to agree with them. The problem of doing this stems from the fact that a person cannot act in a conforming manner without a clear idea of his or her social identity. This uncertainty about the Narrator's identity is embodied by many events and symbols that appear throughout the novel. ...read more.

This is another instance where the narrator should have realized the duality of the white man and his motives. Later when the narrator starts his training in the Liberty Paint Factory it is worthwhile to note how the paint the narrator mixes becomes whiter when drops of black are added to it. The symbolic suggestion in the context of the novel is that a necessary element of blackness in society serves only to enhance the overwhelming whiteness in it. All this symbolism is perfectly placed within the novel to show the importance of the black man's blindness to his treatment by the society he lives in. If the narrator could remember his own identity and value himself, he would not overvalue white men. This exemplifies the advice with which the Grandfather gave our narrator at the beginning of the novel: to understand that he is above the white men because he is invisible to them. And with this knowledge our narrator is supposed to take advantage of the white men, "overcome them with yeses." Although this is so, the narrator's exaggerated sense of the white man's worth is what gives the white man power over him. The narrator gradually comes to realize that he must find a way to identify fully with all social groups, especially his own group of blacks, if he is to act responsibly. ...read more.

The falling action centers on his coming to grips with a philosophy of the diversity of life, which is not all black or all white, all good or all bad. The epilogue then serves as the final conclusion to the plot, revealing why the narrator has written the book and explaining that he is ready to emerge from the underground and live life as a changed and more hopeful man. Throughout the novel, as the narrator becomes more and more disillusioned by his experiences and loses his blindfolds are ripped away; by the end of the novel, the narrator can see clearly. The words of his Grandfather are finally accepted to be false in the sense that the way to deal with whites and society is to overcome them with understanding them, and thereby understanding your place in society. Not by conforming to what society says you should be, but rather look into your invisibility so that you can find yourself and your place in society. As a result of this realization that our narrator had he wrote the novel with the purpose of sharing his experiences and lessons with others, hoping they will identify with and benefit from what he has learned. The narrator concludes his story with a telling sentence: "maybe on some lower frequency I speak for you" ...read more.