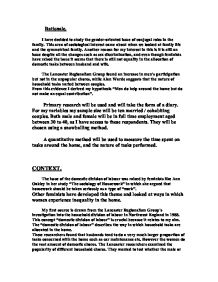 Rationale - I have decided to study the gender-oriented issue of conjugal roles in the family.

Rationale. I have decided to study the gender-oriented issue of conjugal roles in the family. This area of sociological interest came about when we looked at family life and the symmetrical family. Another reason for my interest in this is it is still an issue despite all the changes such as sex discrimination, and even though feminists have raised the issue it seems that there is still not equality in the allocation of domestic tasks between husband and wife. The Lancaster Regionalism Group found an increase in men's participation but not in the unpopular chores, while Alan Warde suggests that the nature of household tasks varied between couples. From this evidence I derived my hypothesis "Men do help around the home but do not make an equal contribution". Primary research will be used and will take the form of a diary. For my variables my sample size will be ten married / cohabiting couples. Both male and female will be in full time employment aged between 30 to 40, as I have access to these respondents. They will be chosen using a snowballing method. A quantitative method will be used to measure the time spent on tasks around the home, and the nature of tasks performed. CONTEXT. The issue of the domestic division of labour was raised by feminists like Ann Oakley in her study "The sociology of Housework" in which she argued that housework should be taken seriously as a type of "work". Other feminists have developed this theme and looked at ways in which women experience inequality in the home. My first source is drawn from the Lancaster Regionalism Group's investigation into the household division of labour in Northwest England in 1988. This concept "domestic division of labour" is crucial because it relates to my aim. The "domestic division of labour" describes the way in which household tasks are allocated in the home. ...read more.

From my diary I can estimate women spend an average of fifty hours a week on housework which is far more than most people spend in paid employment. Men seemed to be doing less than this amount of domestic work compared to their wives, in some days doing less than half what they consider to be housework or related tasks. I have found from my diaries that housework is still seen as the main responsibility of women even though both partners are working in full time paid employment. It is still women who take on the main responsibility for housework from all the ten couples who took part in my experiment. My findings show that women still have an unequal role with men in the homestead. Much of this inequality arises because the central role of women is still seen by a male dominated society as that of housewife and mother. For instance a similarity I found in my study was that nearly all the female respondents who took part carried out similar tasks over one week such as cleaning the toilet, cooking and hovering etc. Whereas the male respondents tasks where also similar for instance gardening and painting etc. This may suggest that many jobs are still seen as men's job and women's job. This compares with the Lancaster Regionalism Group's study. This study showed that 80%of women were responsible for general domestic duties such as cleaning the toilet and only 31% of men took full responsibility for work to be done in the homestead. This tells me about my aims that many full time working women have two jobs in comparison to the men's one job. My own findings reveal that although a wide range of jobs and opportunities are available to women the main role of a woman's life is expected to be that of housewife. Although out of the 10 couples who took part in my experiment only 2% shared the responsibility of housework equally. ...read more.

I found this to be the case in my research between couples. I do think my results are presented in the most effective way. As my chosen method was qualitative I was not able to produce any statistical data however my diaries were in columns with appropriate headings. To study this research further people could develop the idea of helping around the home by using Wilmot and young's assertion that the family is still symmetrical. Also people could research whether women actually want to be helped when it comes to household tasks even though feminists argue that the family is still an exploitative arrangement for women. CONCLUSION My hypothesis read... " Men do help around the home but do not make an equal contribution" I can conclude that my hypothesis was correct because I found from my diaries that women are still doing more than there fair share of domestic work compared to men. This is the case because the extensions of traditional domestic roles of housewives and mothers are still in which women continue to be socialised these include serving and waiting on people, catering for them and cleaning and clearing up after others. These are all jobs women traditionally did and still do in the home. Such jobs include primary school teaching, low-grade catering work, working as shop assistants, supermarket shop fillers, secretaries' etc. For example secretaries often serve their (usually male bosses), organise the office in the workplace to make things easier for them, making tea and coffee and clearing up after their meetings. Primary school involves childminding, catering involves cooking etc. Women have limited career opportunities than males for a number of different reasons. There is the gender stereotyping at school and the wider gender role socialisation process in the home and in the work place. This is similar to the article " Back to the future" by Madeleine Leonard who found that this gender role socialisation process in the home made women continue to see housework as an important part of being a "good wife and mother" and are satisfied with the unequal domestic division of labour. ...read more.