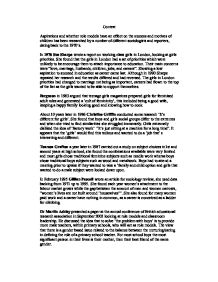 Aspirations and whether role models have an effect on the success and motives of children has been researched by a number of different sociologists and reporters, dating back to the 1970’s.

In 1976 Sue Sharpe wrote a report on working class girls in London, looking at girls priorities. She found that the girls in London had a set of priorities which were unlikely to be encourage them to attach importance to education. Their main concerns were “love, marriage, husbands, children, jobs, and careers”. Showing a low aspiration to succeed in education as career came last. Although in 1990 Sharpe repeated her research and the results differed and had reversed. The girls in London priorities had changed to marriage not being as important, careers had flown to the top of the list as the girls wanted to be able to support themselves.

Ferguson in 1983 argued that teenage girls magazines prepared girls for feminised adult roles and generated a ‘cult of femininity’, this included being a good wife, keeping a happy family looking good and knowing how to cook.

About 10 years later in 1986 Christine Griffin conducted some research ‘It’s different for girls’. She found that boys and girls social groups differ to the extremes and when she tried to find similarities she struggled immensely. Girls extremely disliked the idea of ‘factory work’  “it’s just sitting at a machine for a long time”. It appears that the ‘girls’ would find this tedious and wanted to do a ‘job that’s interesting and different.

Tearesa Grafton a year later in 1987 carried out a study on subject choices in1st and second years at high school, she found the combinations available were very limited and most girls chose traditional feminine subjects such as needle work wheras boys chose traditional boys subjects such as wood and metalwork. Boys had to attend a meeting prior to uptake if they wanted to take a ‘family and child option and girls that wanted to do a male subject were looked down upon.

In February 1995 Gillian Pascall wrote an article for sociology review, she used data backing from 1971 up to 1995. She found each year women’s attachment to the labour market grows while the gap between the amount of men and women narrows, “women’s lives are not built around ‘housewives’”. She also found for many women paid work and a career have nothing in common, as a career is conceived as a ladder for climbing.

Dr Martin Ashley presented a paper at the annual conference of British educational research association in September 2002 looking at role models and classroom leadership. He discussed the idea that to solve ‘the problem with boys’ is to provide more male teachers, within primary schools, who will act as role models. The view that there is a gender based issue related to the balance between the nurturing/caring in defining the role of a primary school teacher. For most school boys the most significant person in their lives is their mother, then their best friend of the same gender.

Girls thrive in a female environment which leads to explain why girls do better at school. Although it was seen male role models should make a difference when a study using video material studied boys with a male and female teacher it was found they were more comfortable with the female and boys were seen to have attachments with other boys that model each others behaviour.

The Joseph Rowntree Foundation has many sources of interest, Young men’s views of masculinity a report by Linda McDowell found that boy’s attitudes and behaviour was very complex but the dominance of a ‘traditional’ masculinity rather than the new version ‘the new man’ was more in tune with today’s teenage boys.Young men emphasised significance of employment rather than study, even if the jobs are temporary or casual. Local contacts were significant  in gaining work and valued by the boys. Most boys were ‘anxious to leave’ school and dismissive of their experiences. Although through the study several young men were interested to going to college although they did not speak up about their intentions, even these boys were looking at ‘traditional male subjects’ such as engineering skills, mechanics and apprenticeships.

More recently a documentary on channel 4 ‘teen girls obsessions’ looked at role models of children, a number of girls at the age of 11 were having ‘fake tans’ their ‘nails done’ one 11 year olds ambition in life was to become ‘Jordan the glamour model’.

I have decided to research the aspirations of boys and girls at primary school age. I am also interested if there is a relationship between role models and decisions about the youngsters’ futures.

There have been changes in thought over recent years about girls ‘aiming higher’ and boys taking more of a ‘backseat’ approach, I am also going to look at different age groups to see when and if attitudes change as children go up.

During the course of last year as part of our families and households unit childhood was researched and it was found that role models can start to influence decisions and behaviour at a very young age in children.  This topic interested me which lead on to my area of research for my coursework.