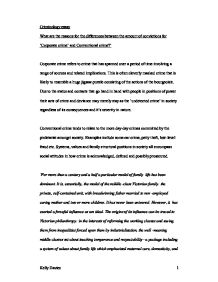 Reasons for differences in amount of convictions for corporate crime, and conventional crime

Criminology essay What are the reasons for the differences between the amount of convictions for 'Corporate crime' and Conventional crime?' Corporate crime refers to crime that has spanned over a period of time involving a range of sources and related implications. This is often cleverly masked crime that is likely to resemble a huge jigsaw puzzle consisting of the actions of the bourgeoisie. Due to the status and contacts that go hand in hand with people in positions of power their acts of crime and deviance may merely stay as the 'undetected crime' in society regardless of its consequences and it's severity in nature. Conventional crime tends to relate to the more day-day crimes committed by the proletariat amongst society. Examples include some car crime, petty theft, low-level fraud etc. Systems, values and family structural positions in society all encompass social attitudes in how crime is acknowledged, defined and possibly prosecuted. 'For more than a century and a half a particular model of family life has been dominant. It is, essentially, the model of the middle-class Victorian family: the private, self-contained unit, with breadwinning father married to non-employed caring mother and two or more children. It has never been universal. However, it has exerted a forceful influence as am ideal. ...read more.

companies may escape adhering to law due to their actions not being clear cut and for example the productive influence that they exert over society. Marxism supports Capitalism. The family is part of the superstructure. It passes on ideologies that justify inequality. The passing on of inequality enables the bourgeoisie to maintain control of the economic base. The family evolved in order to establish paternity in order to protect private property. The family is oppressive and inhibits creativity, it is an ideological conditioning device. Marxists don't believe that things work together they believe that stratification makes society divisive. They see stratification as a mechanism whereby some exploit others, rather than as a means of furthering collective goals. Marxists focus on social strata rather than social inequality in general. Under Capitalism, the Capitalists own the means of production, the proletariat (lower or working class) own only their capacity to work. Landlords rule the land and the peasants are less significant than workers. They are trapped in the idiocy of rural life. The proletariat include those who produce much needed objects in factories with their hands. Class hatred is a good thing and class collaboration is a bad thing. ...read more.

The state decides on wages, and controls the number of number of children people are allowed to have. The money given to these people keeps them just above the breadline. However things are beginning to change in the larger towns and cities, individuals are beginning to get more rights. Talcot Parsons (1955) suggested that the lost functions of the family have been replaced by modern institutions. Examples include production carried out in factories. Education, carried out in schools. Health is now the province of the medical profession and the hospital. Leisure is provided for by a range of institutions including the TV and media. This supports the Capitalist view that society is functional under the direction and influence of power that we succumb to. The fact that we appear to need ever increasing service provision indicates that we do in fact need societal hierarchy. We may be exploited at the hands of this power and given just enough to make us function happily but with a desire for more than just enough to get by. It is this desire that can often lead to conventional crime and it perhaps seems ever determined that conventional crime is here to stay. We need power exerted upon us to promote production. It is often very complicated to prosecute conventional crime. Society functions effectively with a range of changing roles. ...read more.