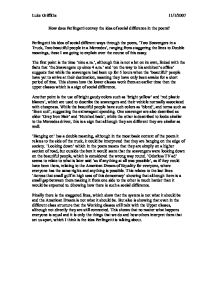 How does Ferlingetti convey the idea of social difference in the poem?

Ferlingetti his idea of social different ways through the poem, ‘Two Scavengers in a Truck, Two beautiful people in a Mercedes’, ranging from staggering the lines to Double meanings, these I am going to explain over the course of this essay.

The first point is the time ‘nine a.m.’, although this is not a lot on its own, linked with the facts that ‘the Scavengers up since 4 a.m.’ and ‘on the way to his architect’s office’ suggests that while the scavengers had been up for 5 hours when the ‘beautiful’ people have yet to arrive at their destination, meaning they have only been awake for a short period of time. This shows how the lower classes work from an earlier time then the upper classes which is a sign of social difference.

Another point is the use of bright gaudy colors such as ‘bright yellow’ and ‘red plastic blazers’, which are used to describe the scavengers and their vehicle normally associated with cheapness. While the beautiful people have such colors as ‘blond’, and terms such as ‘linen suit’, suggesting the extravagant spending. One scavenger are also described as older ‘Grey Iron Hair’ and ‘Hutched back’, while the other is described to looks similar to the Mercedes driver, this is a sign that although they are different they are similar as well.

‘Hanging on’ has a double meaning, although in the most basic context of the poem it relates to the side of the truck, it could be interpreted that they are hanging on the edge of society. ‘Looking down’ which in the poem means that they are simply on a higher section of road, but outside the box it would seem that the scavengers were looking down on the beautiful people, which is considered the wrong way round. ‘Odorless TV ad’ seems to relate to what is later said ‘as if anything at all was possible’, as if they could have been them, relating to the American Dream of Equality for everyone, where everyone has the same rights and anything is possible. This relates to the last lines ‘Across that small gulf in high seas of this democracy’ showing that although there is a small gap between them making it from one side to the other is much harder than it would be expected to. Showing how there is such a social difference.

Finally there is the staggered lines, which show that the system is not what it should be and the American Dream is not what it should be. But also is showing that even in the different class structure that the Working classes still mix with the Upper classes, although not directly they are still connected. This shows that no matter what happens everyone is equal and it is only the things that we do and how others interpret them that set us apart, which I think is the idea Ferlingetti is talking about.