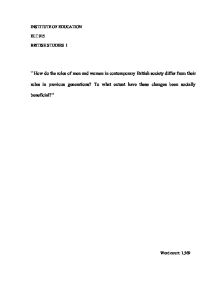 roles of men and women in contemporary British society

INSTITUTE OF EDUCATION ELT 915 BRITISH STUDIES I ``How do the roles of men and women in contemporary British society differ from their roles in previous generations? To what extent have these changes been socially beneficial?'' Word count: 1,569 When discussing the different roles of women and men within contemporary society, there are many issues that have to be taken into consideration. In order to gain a better understanding of a stated problem, this part of the paper will provide general information on dissimilarities between men and women. It is acknowledged that both men and women take on different roles within society, where they both have their own responsibilities. As well as this, it is assumed that because women are generally the most caring, their responsibility usually lies within the home and/or around the family, by taking care of the children, cooking, cleaning, and carrying out other domestic duties to earn a living. Whereas men on the other hand, are often regarded as the more strong and powerful, therefore take on the role of breadwinner for the family, and carry out the jobs that are more manual and physical based. In addition to this, men and women are taught to behave in certain ways, to help show a clear distinction between femininity and masculinity, where females tend to be dependent on the dominant male, suggesting that they are weaker and less able. ...read more.

Very often husband with a various addictions, such as alcoholism or gambling could have spent all money on his favourite activity without even asking for permission of his wife nor considering whether they would have a sufficient amount of money to purchase food supplies in order to feed their children or pay for accommodation so that the entire family could live at their own place. Having mentioned children within the marriage, Hall also indicates that offspring was entitled to their fathers not mothers. She states that no matter what heavy faults the male parent would have, he would still remain the 'natural' guardian of his children. Taking into consideration another matrimonial issue, such as the actual male violence in the nineteenth century, women were not able to take any legal steps against their husbands. Due to the legislation on helping victims, passed in 1878, and the Matrimonial Causes Act women could find protection, judicial separation in the Magistrate's Court, and also to have the legal right to their children (Hall, 2002). The above statements and examples show that in the nineteenth century men could basically do whatever their minds craved for. Following this, this part of essay will look at how roles of women and men have actually been handled within society of the twentieth century Britain where marriage evolved its form, but similarly to the previous century, men remained in control over women. Women were still regarded as physically the weaker sex. ...read more.

Arm in arm with their men colleagues, women were not paid the same amount of money as men, but that was soon to have changed in the next years to come. Finally, the epoch of a new millennium have brought, and is still bringing, transformations to the roles conducted by women and men in contemporary British society and for that reason, not many historical work or researches has been done. Nevertheless, some facts are easily observed when it comes to social changes. For example, Hall (2000) in her work affirms that women status in the legal, social, and economic field changed since the nineteenth century's Britain. What is more, she points out that rights to education, employment, property holding and managing, and also permits to openly entangle in the political matters and processes had improved the position of females throughout epochs. The variety of jobs currently available for women, personal independence within marriage, legal rights to bring up or adopt children, and also the fact of more men staying at home and taking care of children instead of working, indicates great changes when division of roles between men and women throughout centuries are taken into consideration. All in all, within modern societies, patriarchy still seems to be prevalent, but is gradually changing for better, where women are gaining more power and becoming independent. In contemporary British society, it is socially beneficial that both men and women are making progress to becoming equal. ...read more.