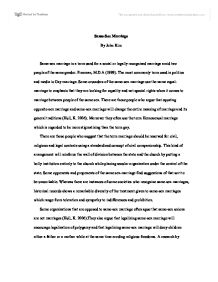 We can say that the issue of same-sex marriage was meant to be ever since the creation of the universe and people should try and accept it as it is. We should also try and note that we are a people of one race and those we all hold female and male traits inside us, period. There are those people who are reverse-wired than other people and those who are androgynous. This is factual whether it is left-handedness or right-handedness or someone being right brained or left brained, et cetera.It is true that Love through understanding and tolerance is a most important factor to spiritual growth.... or else we stumble in fear-based thinking, selfishness and pure and absolute hate (prejudice) against our fellow women and men. ...read more.