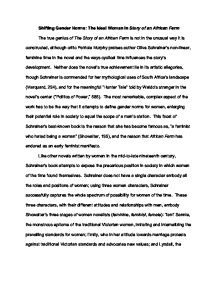 Shifting Gender Norms: The Ideal Woman in Story of an African Farm.

Shifting Gender Norms: The Ideal Woman in Story of an African Farm The true genius of The Story of an African Farm is not in the unusual way it is constructed, although critic Patricia Murphy praises author Olive Schreiner's non-linear, feminine time in the novel and the ways cyclical time influences the story's development. Neither does the novel's true achievement lie in its artistic allegories, though Schreiner is commended for her mythological uses of South Africa's landscape (Marquard, 294), and for the meaningful "Hunter Tale" told by Waldo's stranger in the novel's center ("Politics of Power," 585). The most remarkable, complex aspect of the work has to be the way that it attempts to define gender norms for women, enlarging their potential role in society to equal the scope of a man's station. This facet of Schreiner's best-known book is the reason that she has become famous as, "a feminist who hated being a woman" (Showalter, 195), and the reason that African Farm has endured as an early feminist manifesto. Like other novels written by women in the mid-to-late nineteenth century, Schreiner's book attempts to expose the precarious position in society in which women of the time found themselves. Schreiner does not have a single character embody all the roles and positions of women; using three women characters, Schreiner successfully captures the whole spectrum of possibility for women of the time. These three characters, with their different attitudes and relationships with men, embody Showalter's three stages of women novelists (feminine, feminist, female): Tant' Sannie, the monstrous epitome of the traditional Victorian woman, imitating and internalizing the prevailing standards for women; Emily, who in her attitude towards marriage protests against traditional Victorian standards and advocates new values; and Lyndall, the primary heroine, who seeks her own place in the world unhindered by society's values. She serves as a model for what is known as the "new woman." ...read more.

The relationship of Em and Gregory demonstrates some of the perils that women like Em (Showalter's feminists) face in relationships. When a relationship is based solely on something as indefinable as romantic love the risk is always present that one party in the relationship feels more than the other. The fact that Em chooses not to marry Gregory because of his feelings for her cousin and that she is comfortable with her place in the world-on the farm-alone or with a husband shows how far she has developed as a person. This development is especially noticeable when Em is compared to Tant' Sannie, with her unyielding appetite for her next spouse. Sannie says to Em, "If a woman's got a baby and a husband she's got the best things the Lord can give to her" (227), clearly voicing her Victorian ideas of the limited place for a woman in the world. Younger and more open to change, Em does not make the oppressive, black-or-white statements that Sannie does. She merely states that "Perhaps it [marriage] might not suit all people, at all times, as well as it suits you, Tant' Sannie" (227). Em, according to this statement, is more concerned with what works for each individual-emotionally and socially-rather than what society dictates. Likewise, Em also stands out from Tant' Sannie's model of women in her relationships with other women. While Sannie seems to constantly compete with the women she is around, Em actually loves Lyndall, who is her closest competition for attention. Sannie either rules over other women, like her Hottentot maid, or she competes with them. The episode in which she chastises Em for the new method she uses to make soap reveals her position (227); as the epitome of woman empowered by Victorian society she is very interested in policing other women. Fortunately, Em listens to her rant about the coming plague from God without heeding, wondering only of the changed, enlivened state Sannie has achieved. ...read more.

But before she runs away with her mysterious lover, she thinks of marrying Gregory because she will be able to ignore him, rule him, and maintain her power despite him (173). This sounds very much like Tant' Sannie's idea of the marriage union. Still, Lyndall recognizes that this way of empowering herself is not for her and flees with the stranger on the condition that they not marry (179). This is the last we encounter her directly as Schreiner has her die after an illness from childbirth. She has done the unthinkable in choosing to completely reject the role of woman that society offers based on her own self-knowledge-that role would not fit her. She instead decides to take her chances in the unknown, outside of society in the effort of forging a new way for women to retain self-respect and power. The Story of an African Farm is not a perfect novel. Schreiner biographer Clayton Cherry notes that many 19th century critics claimed to make no sense of its non-linear narrative and disliked its didacticism (29). For its supposed flaws it is a novel filled with white feathers from the bird of truth in Waldo's hunter's story. The character Lyndall is a prototypical female straight from Elaine Showalter's theory of 19th century women novelists, but more importantly she has come to be regarded as a model for females that followed her. Looking at her from inside the novel, set against the other women of the work, her status of new woman is undeniable. The courage that she shows in departing from her prescribed "place in society" is one of the aspects of this book that makes it inspirational. African Farm is an important work that directly deals with the issues that women of the 19th century actually faced. By creating three characters that embody different ideals of womanhood Schreiner demonstrates how society's "gender norms" may be made to shift to fit women, rather than women having to shift to fit roles. The genius of the novel is in the complex way "right" behavior for both men and women is called into question. ...read more.