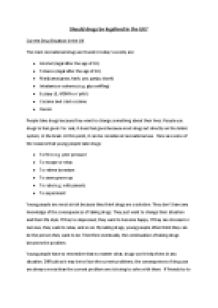 Should drugs be legalized in the UK?

﻿Should drugs be legalised in the UK? Current Drug Situation in the UK The main recreational drugs are found in today?s society are: 1. Alcohol (legal after the age of 18) 2. Tobacco (legal after the age of 18) 3. Marijuana (grass, hash, pot, ganja, skunk) 4. Inhalants or solvents (e.g. glue sniffing) 5. Ecstasy (E, MDMA or 'pills') 6. Cocaine and crack cocaine 7. Heroin People take drugs because they want to change something about their lives. People use drugs to feel good. For real, it does feel good because most drugs act directly on the limbic system, in the brain. At this point, it can be considered recreational use. Here are some of the reasons that young people take drugs: 1. To fit in e.g. peer pressure 2. To escape or relax 3. To relieve boredom 4. To seem grown up 5. To rebel e.g. with parents 6. To experiment Young people are most at risk because they think drugs are a solution. They don?t have any knowledge of the consequences of taking drugs. They just want to change their situation and their life style. If they're depressed, they want to become happy. ...read more.

And using drugs often causes other problems on top of the problems the person had in the first place. A person who uses drugs can become dependent on them, or addicted. This means that the person's body becomes so accustomed to having this drug that he or she can't function well without it. Once a person is addicted, it's very hard to stop taking drugs. Stopping can cause withdrawal symptoms, such as vomiting sweating, and shaking. These sick feelings continue until the person's body gets adjusted to being drug free again. While doing this assessment, my attitude towards the drugs stayed the same, negative. However, from researching, I picked up some interesting facts that I wasn?t aware of before. But, whenever I am in a dilemma about this topic, I always seek advice either from my parents or friends. But I think, I find friend?s advice more useful since they are the same age as me, they would understand the peer-pressure more than parents. They also know the situation more as well. With my parents, there is also the generation gap between my parents and me therefore, sometimes it?s hard for them to understand the situation I am in. Finally, in future, I would like to find out more about drugs through independent research which helps me to learn and remember the information as well. ...read more.

A good piece of work looking at whether drugs should be legalised in the UK. The writer gave some useful background information such as the types of drugs, though perhaps some figures regarding drug usage among young people in the UK would have been useful also.
There were some comments that needed some supporting evidence, eg. the reasons why people take drugs, and I would advise against using ?slang? terms like ?kid? and ?for real?. On page 4, try to make the points related to the wider effects on society. There were a few odd grammatical errors which could be eliminated by careful proof-reading.
3/5