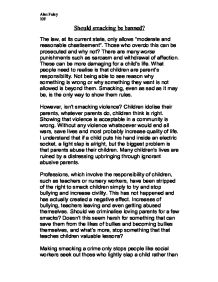 Should smacking be banned?

Should smacking be banned? The law, at its current state, only allows "moderate and reasonable chastisement". Those who overdo this can be prosecuted and why not? There are many worse punishments such as sarcasm and withdrawal of affection. These can be more damaging for a child's life. What people need to realise is that children are parent's responsibility. Not being able to see reason why something is wrong or why something they want is not allowed is beyond them. Smacking, even as sad as it may be, is the only way to show them rules. However, isn't smacking violence? Children idolise their parents, whatever parents do, children think is right. Showing that violence is acceptable in a community is wrong. ...read more.

Increases of bullying, teachers leaving and even getting abused themselves. Should we criminalise loving parents for a few smacks? Doesn't this seem harsh for something that can save them from the likes of bullies and becoming bullies themselves, and what's more, stop something that that teaches children valuable lessons? Making smacking a crime only stops people like social workers seek out those who lightly slap a child rather than those who really are getting abused. Is this logic? No. What a society needs are straight-headed people who know right from wrong. Smacking is discipline and without discipline, children will grow up in a world that they are not prepared for. With no discipline, anti-social teenagers will emerge. And remember, the parent is the boss. ...read more.

Smacking children is a bad example to everyone. Whose opinion we should really ask for is those which do not get a say. Those abused, those hit and very strongly doubt that, as violence is an act that is meant to be to dislike, they will want to be hit. After all, we only feel pain when the body realises that there is a force that might negatively affect us. In my opinion, I think that smacking is right, so long as it does no permanent damage. My mother says that she used to hit my older sisters but, thankfully, she decided that it was wrong before I was born. Therefore my strongest argument for smacking is that my sisters turned out, as much as I hate to admit, to be very supportive of me and helped me in everything I have done. Alan Foley 10F ...read more.