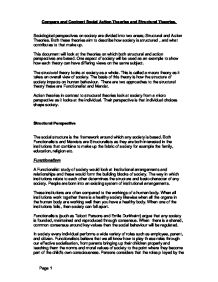 Compare and Contrast Social Action Theories and Structural Theories. Sociological perspectives on society are divided into two areas; Structural and Action Theories. Both these theories aim to describe how society is structured, and what contributes to that make up. This document will look at the theories on which both structural and action perspectives are based. One aspect of society will be used as an example to show how each theory can have differing views on the same subject. The structural theory looks at society as a whole. This is called a macro theory as it takes an overall view of society. The basis of this theory is how the structure of society impacts on human behaviour. There are two approaches to the structural theory these are Functionalist and Marxist. Action theories in contrast to structural theories look at society from a micro perspective as it looks at the individual. Their perspective is that individual choices shape society. Structural Perspective The social structure is the framework around which any society is based. Both Functionalists and Marxists are Structuralists as they are both interested in the institutions that combine to make up the fabric of society for example the family, education, religion etc. ...read more.

Whereas in contrast the Functionalist would say that the working class have the same opportunities as everybody else and they can make of life what they want. * Interactionists would question the over concentration on economic relationships at the expense of social relationships such as family and friendship. They would argue that Marxists ignore the 'actors' choices in society. * Functionalism emphasises shared values and harmony whereas the conflict view of society sees it as divided into groups or classes whose interests conflict with each other. * The Marxist view ignores the subjective interpretations of class for example a persons subjective interpretation of their class might be quite different to their objective class position. * One of the strongest criticisms of Marx's work is that he predicted a revolution and as yet this has not occurred. He seemed to underestimate the flexibility of capitalism for example the Bourgeoisie can make concessions to the Proletariat by offering better wages and working conditions without relinquishing their power. Social Action Perspective These theories concentrate on relatively small scale levels of social interaction and are referred to as micro theories. It focuses on how individuals interact with one another in society. ...read more.

There are similarities between the Interactionist perspective and the Marxist as they both see laws as something that the people in power have put in place. Both would argue that some laws are only clear to the people who make them, not to the people who commit crime. By looking at all perspectives it's easy to see the problems they have in explaining crime. It can be concluded that both structural and action perspectives have advantages and disadvantages. The sociological perspectives complement each other in the sense that each explains some aspect of our behaviour convincingly. Interactionism could contribute to our understanding of society by taking the studies of individuals and combining with the Functionalist and Marxist theories to establish the relationship between the individual and the organised structure of rules, external to the individual. Structuralism does not explain how and why social change occurs. Instead of recognising the roles of individuals shaping their own destiny, they just regard them as part of the pre-determined social structure. The action theorists are humanists and are critical of this structuralist 'puppet theory', they recognise the impact individuals have on society but that society cannot function without humankind. Both theories are valuable studies as they form the basis of further sociological studies. Without them, the new contemporary studies such as Keat and Urry (1975) and Moore (1988) may never have been initiated. ...read more.