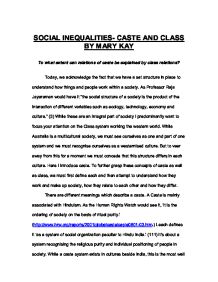 SOCIAL INEQUALITIES- CASTE AND CLASS BY MARY KAY To what extent can relations of caste be explained by class relations? Today, we acknowledge the fact that we have a set structure in place to understand how things and people work within a society. As Professor Raja Jayaraman would have it "the social structure of a society is the product of the interaction of different variables such as ecology, technology, economy and culture." (3) While these are an integral part of society I predominantly want to focus your attention on the Class system working the western world. While Australia is a multicultural society, we must see ourselves as one and part of one system and we must recognise ourselves as a westernised culture. But to veer away from this for a moment we must concede that this structure differs in each culture. Here I introduce caste. To further grasp these concepts of caste as well as class, we must first define each and then attempt to understand how they work and make up society, how they relate to each other and how they differ. There are different meanings which describe a caste. A Caste is mainly associated with Hinduism. As the Human Rights Watch would see it, 'it is the ordering of society on the basis of ritual purity.' (http://www.hrw.org/reports/2001/globalcaste/caste0801-03.htm.) Leach defines it 'as a system of social organization peculiar to Hindu India.' ...read more.

Looking at the Labor side of our society, we can already understand it through Marx theory of the capitalist and working class. Although it is interesting to point out that not everyone in society has associated themselves to be in a class and the term 'ruling class' (or upper class) 'has given offence, raised eyebrows and caused confusion' (Connell 50). We must recognise that this 'ruling class' in fact runs our working class. When it comes to labor, people who have gone through university and have gotten themselves degrees usually find that they are in better jobs (e.g., doctors, lawyers) and people without tertiary education can still become managers, but of lower organisations. For example I don't need any tertiary education to become the manager of McDonalds; it is more on the job training, time and education. These people might still be considered in the middle class or working class. Take a medical surgery for example. The Doctors are seen in the 'ruling class' while the reception staff and nurses working for these doctors are seen in the working class, not only do they lead different working lives (as suggested by Marx) but also different social lives and leisure habits (as suggested by Webber). In terms of marriage in our society it is not so much determined by which class you're in, although sometimes families want their children to marry other people of the same religion or race etc. ...read more.

Caste and Class both demonstrate a division of groups of people on the basis of power. The class system, still having its faults and its inequality, is a much more equal system when comparing it to a caste system. With all the sources looked at, and ideas and definitions put together we can see that caste and class exists on there own, while one is run by power, the other is run by religious values and beliefs,. "A class exits only in and through its relations with other classes" (Connell 51), so the overall function of any system of division to work is the capability for different classes, like that of the capitalist and working class, to work together so that individuals can fulfill more. BIBILOGRAPHY: ==> Bessant, Judith and Rob Watts. Sociology Australia. Sydney: Allen & Unwin, 2nd ed. 2002. ==> Jayaraman, Raja. Caste and Class Dynamics of Social Inequality in Indian Society. Delhi, Hindustan, 1991. ==> Leach, E.R. "What should we mean by Caste?" In Social Inequalities Book of Readings. Scott Poynting. Bankstown: University Of Western Sydney, autumn 2004. 111-140. ==> Connell et al "Ruling- Class Education and the Ruling Class." In Social Inequalities Book of Readings. Scott Poynting. Bankstown University of Western Sydney. Autumn 2001. 50-55. ==> Human Rights Watch. ""Unsociability" and Segregation." http://www.hrw.org/reports/2001/globalcaste/caste0801-03.htm. (Accessed the 2nd of April 2004) ==> "Sociology at Hewett" http://www.hewett.norfolk.sch.uk/curric/soc/class/socmob.htm. (Accessed the 5th of April 2004) ==> "Google: definitions of class on the web" http://www.google.com.au/search?q=define:class. (Accessed on the 5th of April 2004) ==> "Overview of Caste" http://www.cogsci.princeton.edu/cgi-bin/webwn?stage=1&word=caste (Accessed on the 5th April 2004) ...read more.