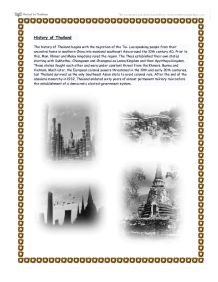 History of Thailand The history of Thailand begins with the migration of the Tai- Lao speaking people from their ancestral home in southern China into mainland southeast Asia around the 10th century AD. Prior to this, Mon, Khmer and Malay kingdoms ruled the region. The Thais established their own states starting with Sukhothai, Chiangsaen and Chiangmai as Lanna Kingdom and then Ayutthaya kingdom. These states fought each other and were under constant threat from the Khmers, Burma and Vietnam. Much later, the European colonial powers threatened in the 19th and early 20th centuries, but Thailand survived as the only Southeast Asian state to avoid colonial rule. After the end of the absolute monarchy in 1932, Thailand endured sixty years of almost permanent military rule before the establishment of a democratic elected-government system. Thai Customs and Traditions The most distinctive Thai custom is the Wai that bears resemblance to the Indian namaste demonstration of affection amongst friends are common in public. It is considered rude to put the feet above someone's head or step on a Thai coin as it has the King's head engraved upon it. Culture of Thailand The Culture of Thailand is heavily influenced by Buddhism. Other influences have included Hinduism, cultural and culinary influences from Southeast Asian neighbors such as Laos, Cambodia and Myanmar, and repeated influxes of Chinese immigrants. Thai culture mainly influenced by Chinese and Indian culture. The Thai can be broken down into various regional groups including the main Thai, northeastern, northern, and southern Thai with their own regional dialects of their mutually intelligible Thai language. Modern Central Thai has become more dominant due to official government policy which was designed to assimilate and unify the disparate Thai in spite of ethnolinguistic and cultural ties between the northeastern Thai and the Lao for example. ...read more.

Thus everyone must prove he is as good as the next person by doing big things or by dressing up to fashion. Much money is spent on clothing to show one is as good as the next. The fear is that someone may look down on (doo took) them and this is not acceptable to the average Thai. 12. LIKE IT EASY Thai people do not like organization or planning. They like an easy life, not one which takes effort or real doing. The approach to life in general is do what is easiest and most convenient for oneself. Queuing up for anything is out as this would be inconvenient for oneself. 13. LIKE CEREMONIES Ceremonies are needed for honor. They give position and help lift their organizers up so others can see them and give them recognition. The pursuit of "face and eyes" (mee na mee taa) is the reason for most ceremonies. If one does not have enough money one borrows to throw a ceremony. 14. BELIEVE IN SPIRITS AND LUCK Shows lack of faith in selves because they place trust in spirits, thevadas, magical items, etc. Uncertainty and fear produce the need to find help elsewhere against bad luck and evil forces. 15. LACK ORDER AND DISCIPLINE Thai people do not like doing things for the group but rather do things for self and the satisfaction of self. There is no concept of disciplining oneself for the sake of the majority. This can be seen in the way they drive cars - whatever is most convenient for oneself is OK, or in the conduct at parties or ceremonies - "give me everything and who cares about the others." ...read more.

The new cultures have also dangers with problems to be solved, because people more interested in politics. To adopt new cultures aren't suited to the peculiar needs and a danger particular place of characteristic. Vary culture by characteristics of its own in each place , harmonizing, however, with the a unity in diversity. Social Issue * Over react with a new born Panda, and forgot about Thai elephant which should be Thailand mascot. * Feminism - need equal right of men and woman, promotion, compensation * Royal petition - Thaksin Most of the following newspaper clippings came from Bangkok Post and The Nation. They are all about Thai Youth issues here in Thailand. This is just some of The Youth issue in Thailand. * Troubled teens can't turn to teachers' - Experts yesterday blamed the distant relationships between teachers and students as a cause in the surge of aggressive behaviour among youths. * Bring them up RIGHT - The teenage students who went on separate shooting rampages last week may well have had their own particular reasons for doing so, but from a larger societal perspective, their violent actions were a reflection of the failure of the family unit, says family experts. (June 2003) * Fighting: the first solution - Young people are physically fighting their way through life and say it's not their fault (June 2003) * Spending for the wrong reasons - Teen spending habits are often the subject of major contention in families. Unfortunately, it's often too late to solve this laying out of cash (or use of credit cards) when the children are nearing adulthood. (May 2003) * VOICE OF THE CHILDREN: 'Give us totally free education' - An "absolutely'' free education for 12 years, native English teachers and computers top a students' wish list, a seminar involving 300 children from around the country has revealed. ...read more.