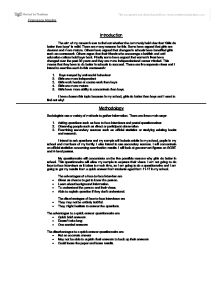 Sociological investigation into why do girls do better than boys in school.

Introduction The aim of my research was to find out whether the commonly held view that 'Girls do better than boys' is valid. There are many reasons for this. Some have argued that girls are cleverer and more mature. Others have argued that changes in schools have benefited girls such as coursework. Others argue that their friends who encourage a laddish and anti-education culture hold boys back. Finally some have argued that women's lives have changed over the past 30 years and they are more independent and career minded. This means that they have to do better in schools to succeed. These are five separate views and I intend to examine each in this coursework: 1. Boys swayed by anti-social behaviour 2. Girls are more independent 3. Girls work harder at course work than boys 4. Girls are more mature 5. Girls have more ability to concentrate than boys. I have chosen this topic because in my school, girls do better than boys and I want to find out why! Methodology Sociologists use a variety of methods to gather information. There are three main ways: 1. Asking questions such as face to face interviews and postal questionnaires 2. Observing people such as direct or participant observation 3. Examining secondary sources such as official statistics or studying existing books and research. ...read more.

Forty three per cent of young women gained two or more A levels or equivalent compared with 34 per cent of young men. A-Level Over recent years there has been an increase in the proportion of both young women and young men in the UK who gain two or more GCE A levels (or equivalent). This increase has been more marked among women. Between 1992/93 and 2001/02 the proportion of women gaining this result more than doubled from 20 per cent to 43 per cent. Over the same period the proportion of men increased from 18 per cent to 34 per cent. At A level, women outperformed men in virtually all subject groups in 2000/01. With the exception of only General Studies, English Literature and some languages, a greater proportion of women than men achieved grades A-C. Analysis My research does not produce definite reasons for why girls do better than boys in schools. Much more detailed research is required before definite answers can be given. Analysis of questionnaire From looking at the results of the questionnaires it is quite clear, that teachers don't strongly agree to the statement as much as parents and students do. Parents and students agree with at least one of the reasons, which I have said. But not all teachers agreed with one of my reasons. ...read more.