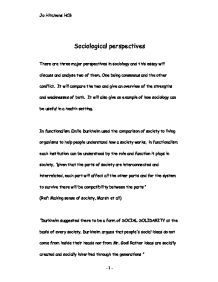 There are three major perspectives in sociology and this essay will discuss and analyse two of them. One being consensus and the other conflict.  It will compare the two and give an overview of the strengths and weaknesses of both.  It will also give an example of how sociology can be useful in a health setting.

In functionalism Emile Durkheim used the comparison of society to living organisms to help people understand how a society works, in functionalism each institution can be understood by the role and function it plays in society, “given that the parts of society are interconnected and interrelated, each part will affect all the other parts and for the system to survive there will be compatibility between the parts”

“Durkheim suggested there to be a form of SOCIAL SOLIDARITY at the basis of every society. Durkheim argues that people's social ideas do not come from inside their heads nor from Mr. God! Rather ideas are socially created and socially inherited through the generations”

“Marx's theory was a 'grand theory'.  Marx's theory took a 'macro-sociological' approach to society and social phenomenon. Marx's theory is an attempt to explain the 'bigger picture' of modern societies”

The two perspectives both have different values of society, and whilst one believed that society was made up through family  the other strongly believed it was the rich who would get richer and the poor would get poorer. “for Marx, there are two essential components of society: First, the economic base or substructure that provides the material needs of life, and second, the superstructure, basically the rest of society including the family, the education system, ideas and beliefs, the legal; system and the political system”

“Durkheim argued that without the regulation of society, individuals would attempt to satisfy their own desires and wishes without regard to their fellow. This societal regulation or constraint had to be based on a shared set of values” (Ref: Making sense of society, Marsh et all)

A strength seen by a Marxist may be that the bourgeoisie (factory owners) have much more power and influence than the proletariats (working class), an example of this would be that members of society who are privileged and rich, are able to attend the public school and therefore have the advantage of holding major positions in the state, industry and banking, and own the mass media.

However, a strength seen by a functionalist may be “while we choose to behave in certain ways, in reality the choices are made for us. The kind of possibilities of thought and experience available to us are not invented by us individually, they are learned” (Ref: Making sense of society, Marsh et all)

Strengths and weaknesses differ on each side, what may seem right to one group may seem totally the opposite to another.

A weakness or criticism of a functionalist may well be that they present a “deterministic view of social behaviour. Some versions of functionalism picture human beings as products of the social system, their behaviour determined by the social structure”

Weaknesses in the conflict perspective could be that Marx predicted the working class would get poorer. This does not appear to have happened, even though the inequalities in wealth and income continue to exist. Standards of living have been greatly improved since the time of Marx, and the working class lead a far better lifestyle than he predicted.

The two perspectives which have been discussed both have their opinions and views on how society is run. “ Durkheim believed that social order was based on a core of shared values. This belief is a key aspect of the functionalist approach” (Ref: Making sense of society, Marsh et all)

“Marx's theory can be said to be 'Holistic'. It is holistic because the theory attempts to explain human relationships from the vantage point of the wider and larger social structures of society rather than the individuals who live those relations.” (Ref: www.sociologyonline.co.uk )

“Karl Marx, like Durkheim, was concerned with the broad questions of what held societies together and how societies change over time. And, as with functionalism, Marxism is a structural theoretical perspective: it concentrates on the structure of society and explains individual actions in terms of the social structure in which they are located. Both functionalism and Marxism stress the crucial and pervasive influence of society” ( Ref: Making sense of society, Marsh et all)

Sociology has various involvements with society; sociology of health is one of these and has been widely discussed. The inequalities of health and care are often publicised, a good example of this would be the Black report, “The Black Report, published in 1980, showed that there had continued to be an improvement in health across all the classes (during the first 35 years of the National Health Service) but there was still a co-relation between social class, (as measured by the old Registrar General’s scale) and infant mortality rates, life expectancy and inequalities in the use of medical services” (Ref: www.ucel.ac.uk )

“good health is a fundamental goal for people and the societies in which they live. Individuals hope for a life free from illness and pains, and societies, through the acts of governments, promote policies designed to counteract ill health”

Making Sense of Society, An Introduction to, I. Marsh and others. 1996, Published in the USA by Addison Wesley Longman Publishing Company, New York.

Sociology in Focus, P. Taylor and others. 1995, Printed and Bound by The Bath Press, Lower Bristol Road, Bath, UK.