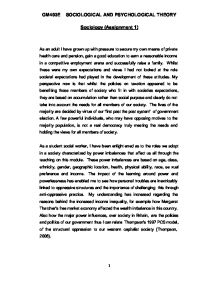 As an adult I have grown up with pressure to secure my own means of private health care and pension, gain a good education to earn a reasonable income in a competitive employment arena and successfully raise a family.  Whilst these were my own expectations and views I had not looked at the role societal expectations had played in the development of these attitudes. My perspective now is that whilst the policies on taxation appeared to be benefiting those members of society who fit in with societies expectations, they are based on accumulation rather than social purpose and clearly do not take into account the needs for all members of our society.  The lives of the majority are decided by virtue of our ‘first past the post system’ of government election. A few powerful individuals, who may have opposing motives to the majority population, is not a real democracy truly meeting the needs and holding the views for all members of society.

As a student social worker, I have been enlightened as to the roles we adopt in a society characterized by power imbalances that affect us all through the teaching on this module.  These power imbalances are based on age, class, ethnicity, gender, geographic location, health, physical ability, race, sexual preference and income.  The impact of the learning around power and powerlessness has enabled me to see how personal troubles are inextricably linked to oppressive structures and the importance of challenging this through anti-oppressive practice.  My understanding has increased regarding the reasons behind the increased income inequality, for example how Margaret Thatcher’s free market economy affected the wealth imbalance in this country.  Also how the major power influences, over society in Britain, are the policies and politics of our government thus I can relateThompson’s 1997 PCS model, of the structural oppression to our western capitalist society (Thompson, 2006).

Reading the Barefoot Social Worker (Searing, 2006) in particular in relation to the teaching on class structures and how society discriminates amongst the lower classes has enabled me to see how service users are amongst some of the most vulnerable and impoverished in our society, and have benefited least from New Labour’s social welfare reforms. Under New Labour we have witnessed not only greater levels of material inequality, but also greater negative feeling towards immigrants, young people and poor families, the very groups that as social workers we engage with.  During my course I have been afforded opportunities to work alongside and come into contact with colleagues and service users who have not been afforded the opportunities that I have been privilege to.  This has highlighted to me how the social circumstances into which you are born affect the life chances that will be available to you because your perception of world will be from that perspective into which you were born.  From the perspective of the social worker, clearly we must be actively involved in the understanding and transformation of injustices in social institutions and in the struggles of people to maximize control over their own lives and engage in social work practice based around ‘anti-capitalist’ values as democracy, equality, and diversity (Searing:2006).

Social class and social stratification promote a hierarchy in our society and hence an inequality of opportunities for those who are considered to be at the bottom of the class spectrum. Marx and Weber have debated how to best define social class but it has often been the case that manual workers are regarded as being working class. The position you are born into may have an important effect on many areas of life.  It may enhance or reduce life chances.  Gerth and Mills referring to western society say that life chances includes “the chance to avoid becoming a juvenile delinquent and very crucially the chance to complete an intermediary or higher educational grade” (Haralambos, 2004:2). This has particular relevance to the Aiden’s delinquent behaviour  and Paul’s initial struggle to achieve educationally in the case study.

Talcott Parson’s theory is that having a class system is functional; it is what we as a society have chosen because it reflects our shared values.   Westergaard and Ressler (1975) argue that class inequalities generated by capitalist system are the fundamental reason for the persistence of poverty amongst the working class.  Marxist view of class is a radical alternative and sees class as divisive rather than an integrative structure. It is seen as the ruling class having power over the proletariat by control of the means of production i.e. labour power as demonstrated in Peter’s powerlessness over his redundancy and Maureen’s powerlessness over her low pay in her machinists job.

Up until the point when Peter lost his job, the family had enjoyed a reasonable standard of living, they were buying their own house, enjoying regular holidays and a new car every couple of years. These symbols of wealth, and their commitment and attitudes towards education to improve the prospects for the children speak loudly about the potential for this family to be socially mobile.  Sarah is clearly looking to improve her class status and is trying to disassociate herself from the stigma of being labelled working class by her middleclass peers.  She has aspirations to be a vet, a model or a TV presenter and is typically middleclass in her attitudes towards her body image and her weight. The loss of Peter’s job has dramatically reduced their financial circumstances. We have to assume it will be difficult to meet the mortgage payments and financially support their children through their education on Maureen’s wages alone. They will be eligible for financial assistance supplied by the Welfare State but will it be sufficient to meet the needs of this family?  For instance, will they be able to still afford the travel costs of sending their children to a school five miles outside of town and what are the job prospects for a manual worker in an area with high levels of unemployment?  From a social work perspective the family would benefit from advice on employment, training and benefits they may be entitled to.

Social disadvantage impacts on education both directly and indirectly, many studies have drawn attention to the cumulative effects of low social class of origin, poor educational achievement, reduced employment prospects, low levels of psychosocial well-being and poor physical and mental health (Whitty G, 2001).  In the case study Aiden is demonstrating this impact on his education with disaffected behaviour displaying as exclusions from his school whilst Peter has made violent threats towards Maureen and is binge drinking. The family would benefit from support from Education Social Worker intervention in Aiden’s case and mentor support for Sarah who is vulnerable at this point in time.

Weber postulated that traditional modes of power are characterized by patriarchal domination, by the rule of the father and the husband (Harrington A, 2005:235). Maureen is at risk of domestic abuse. Woodward (1997:97) explains that women’s dependence on men or on the state, especially through non-contributory, means-tested provision rather than insurance provision in their own right, has tied women down into social and familial relations which have often provided the site of their experiences of domestic violence.  Social policies generated through government power have contributed to their situation.  From Talcott Parson’s perspective, power in society would be achieved through collective goals such as economic expansion and higher living standards, which can be seen to stem from this goal.  The family in the case study used to enjoy a good standard of living as they had regular foreign holidays and a new car every couple of years.  Their situation maybe better explained from a Marxist perspective, which argues that power derives from wealth in the form of owning the means of production.  From this perspective the source of power lies in the economic infrastructure and social policy which would have influenced Peter’s situation; the decisions in him losing his job were taken by those in power and rendered him powerless to the outcome of the situation. This economic oppression has meant that as a family they most likely cannot afford to go out, which may cause them to lose contact with family and friends.  This social exclusion together with the constant worries about making ends meet has put a strain on the family relationships which studies show may contribute to the couple separating or an older child leaving home.

Power imbalances characterise the relationship between service users citizens, social and political institutions and agencies concerned with health and social welfare.  Empowerment admits the possibility of change in both key personal relationships and those between people and social and political structures. The theory and practice of empowerment may assist this family allowing them to challenge their predicaments. As a social worker looking to support the family in the case study an anti-poverty strategy would need to be employed within several levels of the social work agency supporting the area where they live. It should encompass, local information campaigns on matters such as benefits for low-income families, drop-in advice, take-up campaigns promoted in GP surgeries, libraries and benefit offices targeted at maximising benefit claims (Collins Dictionary of Social Work, 2002:30)