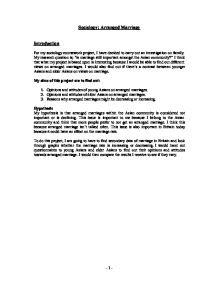 Sociology: Arranged Marriage Introduction For my sociology coursework project, I have decided to carry out an investigation on family. My research question is; "is marriage still important amongst the Asian community?" I think that what my project is based upon is interesting because I would be able to find out different views on arranged marriages. I would also find out if there's a contrast between younger Asians and elder Asians on views on marriage. My aims of this project are to find out: 1. Opinions and attitudes of young Asians on arranged marriages. 2. Opinions and attitudes of elder Asians on arranged marriages. 3. Reasons why arranged marriages might be decreasing or increasing. Hypothesis My hypothesis is that arranged marriages within the Asian community is considered not important or is declining. This issue is important to me because I belong to the Asian community and think that more people prefer to not get an arranged marriage. I think this because arranged marriage isn't talked often. This issue is also important in Britain today because it could have an effect on the marriage rate. To do this project, I am going to have to find secondary data of marriage in Britain and look through graphs whether the marriage rate is increasing or decreasing. I would hand out questionnaires to young Asians and elder Asians to find out their opinions and attitudes towards arranged marriage. I would then compare the results I receive to see if they vary. Methodology For my project, the method I would be using to investigate my research question is questionnaires. The reason why I have chosen this method is because I could ask questions which could include both open and closed question. Therefore my research would have a varied amount of data where the results include both qualitative and quantitative data. Through qualitative data, I would be able to gain answers which would give me an in-depth understanding about people's feelings towards arranged marriages. ...read more.

One of the reasons why arranged marriage may seem to work in there countries is because, for example in Bangladesh, divorce is a taboo. People are made to give the impression that their marriage is working but in actual fact, they probably don't want to be faced with the society looking down on them. This is why those certain couples try to make things work, especially for the sake of their own families. There are some cases where divorces in places like Asia, are slowly rising. This may be because of the effect women's rights had had on women, especially for those in the US or the UK. Before, when Asians migrated to those parts of the world, they began to accept the modern cultures and lifestyles and learnt to adapt to them. In Britain and the US, women's rights and opportunities were equal to men's whereas in third world countries, women still had no voice. As a result, marriage could've seemed to have worked, but it's hard to tell if those married women were happy with their relationships with their husband or not as not many of them spoke out. Now that many Asians live in Britain or the US, the younger generations are being influenced by both the British culture and also Asian culture and are now mixing the two together. Being able to do this, we are now receiving mixed views about marriage, whether it is arranged or not. Many people are viewing arranged marriages as something they might fall back on if they fail in finding someone themselves. Others, who aren't so sure about what arranged marriages are about, are presuming that it must be something very similar to forced marriages as you are not choosing the person you want to be, yourself. Some people feel that they wouldn't want someone else to choose the person who they'll have marry. ...read more.

She said that if we see that our grand parent's marriage and our parent's marriage had worked, 'we also go along with it'. There was also a person who felt the 'media' influenced us most about marriage as it 'has the biggest influence in society today'. Those who ticked both 'religion' and 'traditions' felt the two go 'hand-in-hand' which together creates a very firm view about marriage. Evaluation Overall the research methods used were suitable for my coursework because through the questions I asked, I was resulted with a lot of responses. A problem I faced because of using the method of questionnaires was that, there were some people whose English wasn't their first language. Therefore I ended up asking them the questions and then writing the answers down myself, so it was more like an interview. A question I feel not everyone understood was question number 9, which asked the respondent their opinions of what they think influences mostly on the different views on marriage. Again, I think the reason for this is because English was not their first language. I felt that I needed more time to finish my coursework as I didn't have as much male respondents than female respondents. Because of this, I didn't get a chance to see whether a female's answer differs to a male's answer. Also, I wasn't able to find much secondary data such as whether the marriage rates are increasing or decreasing because I lacked timing. I don't think that there were ethical problems like bias because no one felt insecure of answering the questions, as it was quick and easy to do and also, details like the name of the respondent's was kept anonymous. My research could've been improved if I found more secondary information. I could've also improved my research by adding more questions to my questionnaire. From carrying out this research, I have learned about the difficulties of research. I have enjoyed writing this coursework and conducting this investigation because I think it improved my organization and communication skills. ...read more.